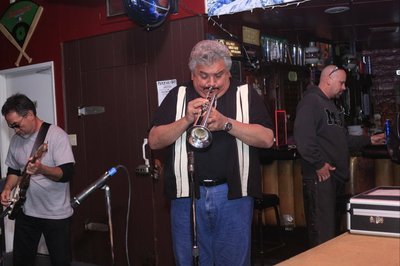 The Shelltown Horns are a blues-rock band co-founded by trumpet player Carlos Serrano, aka Lambchops. Serrano cannot remember when, exactly, he started the Shelltown Horns, but he knows they go way back to Etta’s Place on University Avenue. For a time, he ran the jam there.

“Originally there were three of us,” he says, Sleepy (Gilbert Flores), Albert Cisneros (he is without nickname,) and Serrano. “Three horns.” With a pick-up rhythm section, they frequented Croce’s in the Gaslamp during their heyday as a band with their distinctive Latin Tower of Power sound. Since, they’ve gained members and become a more full-service horn section, backing a variety of groups from Latin jazz and pop oldies to rhythm and blues.

The name Shelltown derives from a neighborhood in Southeast San Diego. Bordered by Interstate 5, Highland Avenue, Division Street, and Gamma Way Serrano thinks maybe the neighbors originally called it Shelltown because there were military bunkers stationed in the area during WWll.

“Another story,” says Serrano, “is that there was a Shell gas station down there.” Otherwise, he’s not entirely sure. “It would be interesting,” he says “to figure out the history of that place.”