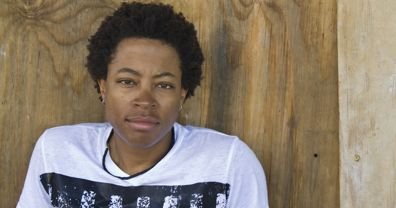 Based in North Park, Sharon Hazel’s music is influenced by many genres, no doubt stemming from the many places she has called home. The California native was raised in the Bay Area, where regular trips to San Francisco, Berkley, and Oakland started at a young age.

She was influenced at home by her parents' extensive record collection of R&B and soul artists such as Heatwave and Earth, Wind & Fire. Ultimately, it was bands like Van Halen and Guns N’ Roses that made her beg her parents for a guitar at age eleven.

Her first gig was at age thirteen as a rhythm guitarist in a cover band. During high school, her family moved to Kansas City, Missouri, where Hazel was influence by two new genres of music: jazz and southern rock.

“My mom always had jazz on the radio in high school,” says Hazel. When she got a license and began driving, she would flip the dial to classic rock stations. There she discovered southern rock artists such as Creedence Clearwater Revival, the Eagles, Steve Miller, and the Black Crowes. Hazel’s next home was Chicago where she was exposed to two more genres: blues and acid jazz.

Hazel became a fan of acid jazz bands such as the Brand New Heavies, Sumo, and Bumpus. She also discovered songwriting in Chicago. “I know it sounds weird,” she says, “but I never really listened to lyrics until I got to Chicago. My freshman year of college I met so many different people and listened to so many different artists.”

Hazel performed in bands around Chicago as a guitarist while writing her own songs privately. She finally took the plunge and starting performing her original music at open mics around Chicago and hasn't looked back since.

She moved to North Park, to a neighborhood she says is on the cusp of University Heights, in September 2006. “It’s in my veins. I’m a California girl,” she says. “Also, the long winters.”

Since then, her indie folk-funk-rock group Sharon Hazel Township has hundreds of performances under thei belt, including a memorable stop in London and festival performances in front of thousands. She was featured on television’s Indie Music Show, as well as on MySpace as one of Southern California's top folk-rock artists.

Why Sharon Hazel Township? “I wanted a name that conveyed a community-type feel. In most bands, you don’t always have the same members.” She explains that she often picks up different side men in different cities on a tour. “But Townships were originally intended to exclude people. In South Africa, they shipped the black folks out to suburbs they called Townships.”

Township, in this iteration represents the opposite of community. It is in this intentional misuse of the word that Hazel finds her meaning.

Crumb Records is the name she gave her record label. “My mother’s nickname growing up in Texas was Sugar Crumb,” she explains of the name, which over time got shortened to Crumb. 37 years old in 2011, she released a collection of originals called Socrates and Urgency, while supporting her music by waiting tables at Snooz in Hillcrest and bartending in the VIP lounge at Qualcomm at Charger games.

Her musician’s path took a solid left turn when she began attending jazz classes at Mesa College. “I’ve been a student of the jazz guitar. I like the improve free-form stuff...not big band, just a drummer, a bassist, and a guitarist.” She says she wants to become a solid jazzer. “I want to be able to walk into a club in any city and sit down and play.”

For her sophomore album 14 C Bags, Hazel created and performed every note, beat, and lyric. She furthered the DIY theme by making the LP the second album released off her own Crumb Records. Its release was followed by a cross-country solo acoustic tour and with an in-studio performance live on FM 93.5 in Laguna Beach.