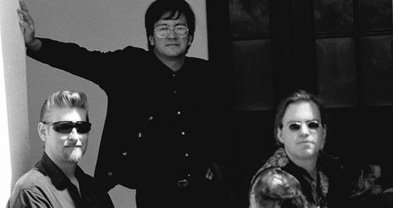 In 1968, the sound that would forever be called “mod” was distilled by the Who, the Kinks, the Small Faces, and their foppish, finely dressed ilk. By disguising itself unconvincingly as Power Pop in the late ‘70s, it all came back to be reinterpreted -- right down to the go-go dancers -- by Nick Lowe, Greg Kihn, and Squeeze.

Then the film Quadrophenia attempted to immortalize the original mod scene -- instead managing to trivialize it -- while anyone who sounded remotely like Paul McCartney became as hard to sell as, well, Paul McCartney.

At least in San Diego, the ‘80s were friendly to mod-leaning rockers with thin ties and a bright-pop sound to match the polish on their shiny shoes. Managing to be both stylish and retro (no easy feat), Manual Scan thrilled not only the metal Vespa crowd but amassed a European following as well with several popular single and EP releases.

Bart Mendoza and Kevin Donaker-Ring have been musical partners since 1980, when they paired up to form the mod-inspired Manual Scan.

“You had to own a metal scooter to be mod,” Mendoza says, referencing local scenesters who used to hang out at Vespa Super Shop and Gelato Vera in Mission Hills, checking out the Tell-Tale Hearts at the old downtown Soma, or rallying to see Quadrophenia at the Ken.

After a string of overseas hits (with little attention paid in the States), the duo reformed in the early ‘90s as the Shambles, with a rotating roster of new players (including bassist Mark Z of the Crawdaddys and a succession of drummers rivaling Spinal Tap’s). Their songs still maintain that ‘60s sound -- albeit more powered-up, à la Nick Lowe or Oasis -- plus they have a vast repertoire of eclectic covers (Badfinger, the Zombies, unreleased bootleg Beatles cuts, and more).

Mendoza is currently cowriting a book covering “every record released from every San Diego performer” from the turn of the 20th Century through the ‘90s. He also collects local vinyl, with the most rare piece in his collection being the Scottsville Squirrel Barker album with Chris Hillman (later of the Byrds) from around 1962. “Copies have sold in excess of $200 in mint condition. I got mine at a thrift store, although that was 25 years ago.” He still rides a metal scooter and has never owned or driven a car.

The locally published comic book Vampyrates features a character named Doctor Kevin Ring, a scientist who battles a demonic race of vampire pirates; the character is based on Donaker-Ring. “He isn’t a rocker -- he’s educated, refined. The last thing he wants to do is leave behind his true love Anne Marie [based on Donaker-Ring’s real-world wife] and chase down horrific apparitions in the deep Atlantic. He only does it because he’s broke and it’s the only way to save the family estate from anxious creditors.” Broke, and with anxious creditors: sounds pretty rock and roll.

The Shambles have toured extensively and performed in Mexico, Spain, England, and throughout the U.S., appearing in concert as well as on TV and radio. They’ve also contributed to over three dozen compilation albums and have released four of their own albums to date. There’s been a fair bit of press, from Billboard to Creem, and they’ve gigged with Jonathan Richman, the Rembrandts, Superdrag, the Records, OK Go, the Wondermints, Sugarplastic, Rusty Anderson (Paul McCartney, guitarist), the Alarm, Robyn Hitchcock, 20/20, Graham Parker, and the Stereophonics.

In 2011, their version of the Mary Tyler Moore TV theme “Love is All Around” was included in the benefit compliation Hearts on Fire: Sweet Relief II, from Michigan’s JAM Records. The following year, Mendoza and Donaker-Ring revived their 1980s band Manual Scan.

Their version of “Might As Well,” originally by the Raspberries, appears on an Australian Zero Hour Records re-issue of the Rasberries tribute album Preserved . “One of our best,” says Mendoza of the track, “with stellar drum work from John Chilson.” Their song "Wouldn't You Like to Be A Bear?" appeared on the bear-themed 4-disc 40th Anniversary Box Set from German label Bear Family Records, alongside tracks from Ry Cooder, Chip Taylor, Swamp Dogg, the Fuzztones, and around 60 others.

2015 saw the release of a new EP, Radio Daze: The Pyles Sessions, which dropped October 15 from Bickerton Records, available only in vinyl and digital formats. The following year, their Clouds All Day album was reissued on vinyl with a bonus DVD featuring an 11-song set on Spanish TV.

The 2017 compilation Sweet Relief 4, issued by Michigan label JAM Records to help raise funds for cancer research, includes a Shambles remake of a song originally by Jeremy Morris, "It's Getting Better," with Morris providing keyboards, additional harmonies, and lead guitar alongside Kevin Ring.