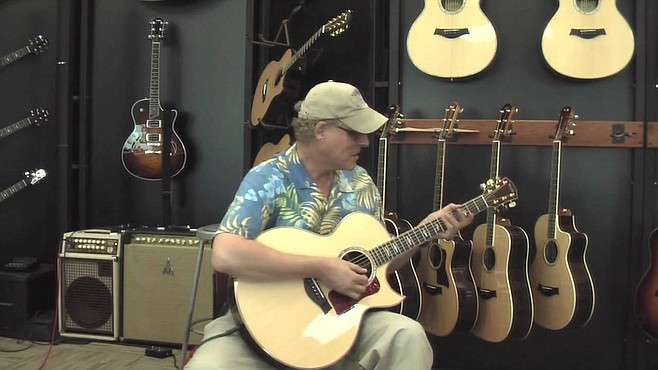 Expressing himself through a blend of folk, Indian, and jazz styles, he shows technical mastery on guitar that evokes delicate yet intricate expressions of nuance and subtlety.

His debut CD Sacred Love (released October 2010) features likeminded collaborators such as Windham Hill kingpin Will Ackerman (whose label signed Shambhu), new age bassist Michael Manring, Pat Metheney percussionist Jeff Haynes, John McLaughlin sax player George Brooks, and progressive Stick maestro Tony Levin (King Crimson, Peter Gabriel). It’s too mystical and whispery to be called rock or jazz, but there’s too much bite and friction to the guitar on this album and its followup Dreaming of Now (2013) to be filed under new age or world music.

A former resident of New York City and San Francisco, he moved to San Diego in early 2014. He brings with him a musical resume that namedrops Yes frontman Jon Anderson and TJ’s favorite son Carlos Santana, as well as Whitney Houston and Clarence Clemens, among others. “I left New York partly due to the brutal winter and intensity of daily life,” he says. “I checked out possibilities in San Francisco, Los Angeles, and San Diego, and felt San Diego provided the best quality of life and value. As a Taylor Guitars artist, Taylor is also conveniently nearby in La Mesa.”