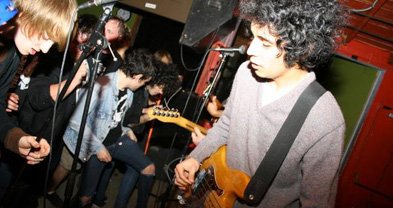 Influences: Long Live Logos, the Power Chords, Kill Me Tomorrow, Iggy and the Stooges, the Parker Theory, the Plot to Blow Up the Eiffel Tower, As I Lay Dying, Roy Orbison, Herbie Hancock

Sess drummer Andrew Montoya grew up in a house where both of his parents were musicians, as were their brothers and sisters and mothers and fathers (singers, guitarists, bassists, and his mom played tambourine). Guitarist Jeremy Rojas's mom learned to play acoustic guitar to accompany her pastor husband's sermons.

Members began by playing in Riverside punk groups. Rojas was previously in Verbal Kent, with his brother Yonny, as well as playing in As I Lay Dying for a short while. Joining up with brothers Sam (singer/guitarist) and Mark (bass) Rivera, Rojas and drummer Andrew Montoya became the Sess in 2004. After a move to San Diego, keyboardist Aldo Bustof joined the group

The Sess' name (pronounced sesh) is shorthand for sessions. Their 2008 debut CD Agendumb is on Single Screen Records, run by Craig Barclift from the Power Chords and "Action" Jackson Milgaten, of Vision of a Dying World. It was nominated for Best Rock Album at the 2008 San Diego Music Awards.

Local audiences were very supportive, bringing them much buzzworthy press, though the band was known to be booed at, mainly when they played “Fuck the Navy” for crowds with a military presence.

As of October 2008, the Sess had split. Drummer Andrew Montoya and Jeremy Rojas formed a new band, Beaters (no relation to Billy Vera and the Beaters), whose initial demos were recorded at Montoya's home studio in North Park. The band also included Sess keyboardist Aldo Bustos and bassist Craig Barclift (the Powerchords).

Montoya also formed Ale Mania in early 2009, for whom the Sess drummer played bass and sang, as well as writing songs, a luxury rarely afforded him in the Sess. His bandmates included former Sess players Jeremy Rojas and Aldo Bustos. The group was rounded out by Melissa “Christy” Beats, drummer for the Atoms. Sess members also went on to play with Shiva Trash and Northern Tigers.

Members of the Sess also continued to play together in Northern Tigers. A Sess reunion performance was staged at the Soda Bar on New Year's Eve 2015/2016.