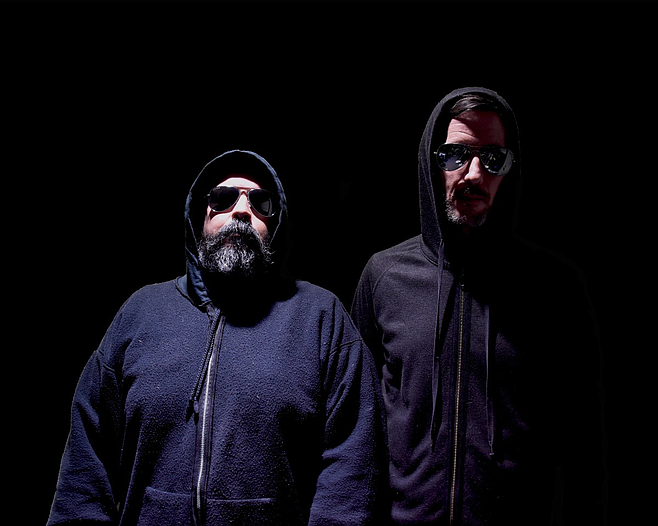 By 2007, the band had distilled down to a duo featuring Sal Gallegos and John Rieder, who recorded Skull With Antlers in 2009. In Autumn 2012, they released a video for “Kathleen Turner Overdrive,” from a song on their self-titled album on Three One G Records. The silent movie-style video features a pie plate UFO, militant juggalos, and zombie slaves.

Skull With Antlers (Three One G) is forty-five minutes of doomy frenetic noise with occasional forays into quiet minimalism and copy-and-paste sound sculpture. W.T. Nelson (Geronimo, Bastard Noise) shows up on a couple of tracks with his brood of Trogotronic outboard gear. That summer, one of the band's tracks, “Pinche Harmonics,” appeared on a split seven-inch from Three One Gee b/w Qui's “Feel My Body.”

W.T. Nelson was again enlisted for their 2019 album 101, featuring guests such as Justin Pearson (Dead Cross, The Locust, Retox, Planet B), Sam Lopez and Esteban Flores. Recorded in San Diego by Gallegos and Rieder and mastered by Nathan Joyner, it was released digitally as well as on smoke-colored vinyl. It includes tracks like “Pat Minotaur,” “Scott Baiowülf,” “Pariah Carey,” "Ted Nugent Was Goth In High School," and an eleven and a half minute track, "Black Metal to English Dictionary.”

Near the end of 2019, they recorded a live-in-studio Half Way Home session for Orchestral Maneuvers in the Darkthrone.