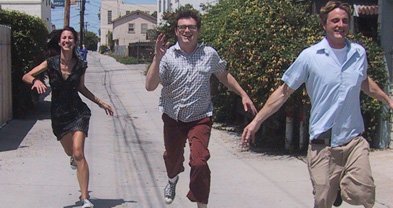 "The band sounds a bit like a mix of Pixies, Pavement, and Guided by Voices," says Adam, guitarist for Secret Apollo (formerly with Snark). Formed in 2002, drummer Steve cites more heavy-metal influences, as evidenced by his tattoo: a thigh-wide image of one of Kiss' members. "I picked Gene Simmons 'cause he's the most recognizable. It's the image from the Love Gun cover, with him in armor and flames behind it."

Bassist Amber, who used to write for SDAM.com, comes from a more gothic space. "I love the Cure -- I'm wearing a Cure shirt right now -- and I like Orgy...any music that has dark texture and somber moods. That's my job to provide. Adam's got his indie-rock thing and Steve always dreamed of being in Mötley Crüe."

Secret Apollo CDs were sold at shows and made available at www.secretapollo.com. The website posts playable MP3s of songs like "Piccolo," "Flip Me On," "Vampire," the hard rock "Always Turns Out Bad," and even a screwball tribute to North County's Museum of Making Music. The band gives out free Red Vines candy ("All you can eat!") at all their shows. "We get it by the bucket and we've never run out," says Adam, "but sometimes people throw them around and the club makes us clean up the mess."

Secret Apollo’s Homemade Time Machine was released in 2006, followed by Hiding Something Great in 2008. They released two albums in 2010; Circus Opus and Professor of Awesome.

Their final show happened April 1, 2010 at the Whistle Stop. Available only at that particular gig was a DVD collecting their music videos (“Piccolo,” “My Solo Album,” “Leaps and Jumps,” “Streets of Danger,” etc.) and a CD containing unreleased songs, album outtakes, and rehearsal demos.

They played a reunion set on March 1, 2013 at the Soda Bar, while singer/guitarist Adam was back in town visiting from his new home in Australia.