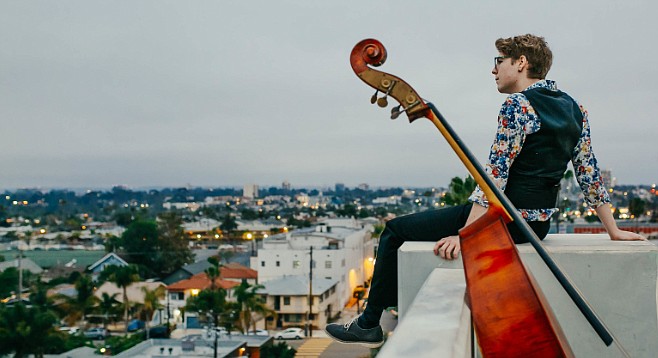 The album, featuring a cover photo shot in North Park, is named for a poem by Allen Ginsberg. “The poem is about a battered old sunflower by a railroad that has gotten covered by soot because of the all the trains. At the climax, Ginsberg gives a sermon to the sunflower and to Jack Kerouac about the innate humanity of all people. That spoke to me, so I wrote a song by the same name that became the title track of my album.”

Guests on the album include Louis Valenzuela (guitar), Matt DiBiase (vibraphone), Julien Cantelm (drums), and Camellia Aftahi, a classical bassist and Cincinnati Symphony Orchestra Diversity Fellow. "The instrumentation of my main quartet is a bit unusual, eschewing piano and saxophone in favor of vibraphone and guitar. This gives the band access to all sorts of colors that one usually doesn’t hear."

Hicke told the Reader that he looks forward to trying on his new role as a frontman with a series of live performances in support of the album, even if the road is a high risk place to perform. "I was playing with the Ryan Dart Trio at Viejas Casino and, during the soundcheck, my amp made a loud pop and wouldn’t turn back on. There was plenty of time before downbeat, and at almost any other gig I would have had enough time to head home and grab something else, but unfortunately I was fifty minutes away and there was no way I’d make it back in time. A soundman saved the day by micing my bass with one of the vocal mics they were using, but it was a rough time...I’ve been making sure to bring my surge protector with me wherever I go ever since then."

The bassist relocated to Cincinnati in mid-April 2019. "The last gig I'm playing with my group will be on March 31 at the Handlery Hotel...I'll be back every now and then. Looking forward to starting a new chapter in my life!"