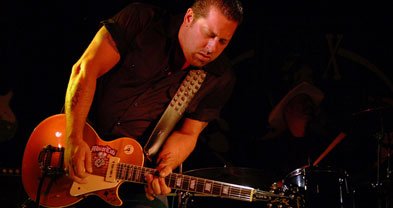 Sound description: Greasy rockabilly to wrench on your car by.

Playing in bands since the age of 16, Scottie “Mad Dog” Blinn describes his head-rush heartland music as “Lightnin’ Hopkins meets Social Distortion. I call it ‘grease punk’: deeply rooted blues, with a lot of attitude that tells a good story.”

Blinn first came to local prominence in the late ’80s while playing sideman to San Diego bluesman Tomcat Courtney. He says a local concert is what set him on the path of an aspiring bluesman. “[I saw] Stevie Ray Vaughan at SDSU Open Air around 1986, when I was 16 years old. The Beat Farmers opened. Country Dick was in rare form, needless to say, and Joey Harris blew my mind with his vocals and guitar work. Stevie Ray just blew the doors off the place. When I recorded a record for Joey a couple years back, my mom said, ‘You’re not hanging out with those Beat Farmer boys, are you?!’ She’s since become a huge Joey Harris fan after meeting him and his beautiful family.”

In 1992, he and drummer Tom Essa (Natasha’s Ghost) teamed up to form the Mississippi Mudsharks with bassist Mike “Sandalwood Haze” Jones. They were frequently nominated Blues Band of the Year at the San Diego Music Awards.

“When I was 23 or 24 and we were doing our first CD,” he recalls for the Reader, “we went to Hollywood to master it. We had lunch at Roscoe’s Fried Chicken and Waffles and met Ice Cube, Ice-T, and Tiny Zuess Lister.”

By 1994, the Mudsharks put out their first CD, Workin’ for Nickels and Dimes, and opening for every major blues headliner coming through town. The group had three European chart topping CDs on the CrossCut Records Blues Charts in the mid-’90s before breaking up in 1999, though the split didn’t turn out to be permanent (one shortlived incarnation as Mississippi Mud included former Social Distortion harmonica player Eric “Jailhouse” Von Herzen).

Blinn later formed the Tiki Torchers with former Hooters drummer Dave Uosikkinnen and bassist Tim Butler (Hot Rod Lincoln). In 2004, he and his wife Roxanne were married in Antwerp, Belgium, by famed New Orleans musician Dr. John. He’s also been playing guitar for Punk Rods since 2005, and he was named in HARP magazine as a guitarist/vocalist to watch in 2006.

On the local education front, Blinn has a degree in psychology from the University of San Diego and worked as a residential supervisor in a group home for troubled teens. He later designed a music instruction course called Rock Academy of San Diego. As of 2011, he’s teaching grade school students at locales like Sacred Heart Parish School in Coronado.

“If you can count,” he begins, “I can teach you how to play.” He leads the classes through a four-beat pattern where he and the kids strum the same notes in unison for several bars on the downbeat before he introduces them to the next concept: the up beat. “It’s like if you put your sneakers in the dryer,” he says. “Ba-bomp, ba-bomp.”

At this session, a fifth-grader plays a shiny black Epiphone. Is it hers? “No,” she says. “It’s my dad’s. He has, like, ten guitars. I don’t think he’ll miss one.”

The Rock Academy is a continuation of the Blues Summer Camp, a music program for kids that Blinn created and taught at the Epicentre in Mira Mesa in summer 2010. “This is exactly what I need to be doin’. I’ve got a lot to share, you know, from 20 years of experience. And I found out I’m a good teacher,” Blinn laughs, “even with young kids, just putting it in their language in a way that they can understand.” Today is the second meeting in a six-week series of hour-long classes that meets on Tuesday afternoons. By the end of the series, students will know basic chords, notes, and some theory.

Peter Harris (whose brother is local bandleader Joey Harris) has been the principal at Sacred Heart for two years. Even though surrounded by an affluent community, he says that there is no money in the budget for things like music class. “One of the difficulties that we have as a Catholic school where people are paying tuition is for the extras. To be able to have an after-school program from a quality person like Scott to come in and teach the kids, that’s not something we can afford to have on staff.”

Blinn founded the record label Double Barrel Records, founded in 1998 and based in Lakeside, where he lives with his wife Roxanne and son Jackson. “I kind of like my house. There are guitars, hot rods, a recording studio, a pool, a great view of El Capitan mountains, and a lot of open space.”

In early 2012, his Coronado music students won First Place in the Diocese of San Diego Songwriting Contest for their song “How Will They Make It?” concerning kids helping kids in need.