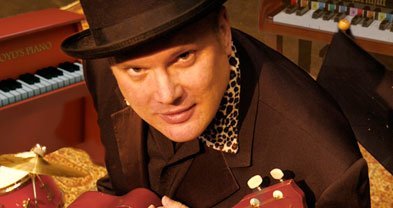 Scott Paulson is a classically trained symphony oboist known for his musical eccentricities. Among his projects is the Teeny-Tiny Orchestra, with compositions and performances based around sound effects and offbeat instruments like toy pianos, oboe, theremin, mouth harp hooters, etc. He and the band’s handful of musicians also play live soundtracks behind the screening of old silent films.

Asked about the score he wrote as a modern soundtrack for Josephine Baker’s 1927 silent-film classic Siren of the Tropics, he says “I think I’m stealing this line from Kathy Griffin, but we all need to find the strong black woman inside of us and set her free.”

Paulson is known as a collector of musical oddities. His toy piano collection numbers “more than 200, but less than 300.” He has a warehouse full of hundreds of sound effects instruments and noisemakers and bona fide musical instruments.

Since 2001, Paulson has been putting on events at UCSD, such as hosting the Short Attention Span Chamber Music concert series and the annual Toy Piano Festival. He organizes displays in the campus music library of what he calls “educational toys and defunct media.” To wit, he has curated collections of such oddities (or antiquities) as Morse code devices, the Theremin, a strip of metal called a thunder sheet, and so-called magic lanterns, as well as working with several local theater groups on various productions.

In May 2010, he was selected to perform his Tropics soundtrack at the Black France Film Festival in Paris. “I was excited to have been picked back then,” says Paulson, “because of the incidents that were going on at the time at UCSD.” He refers to a ghetto-themed party planned by UCSD students called the Compton Cookout drew statewide criticism in February 2010.

At the Paris festival, Paulson performed with his own Teeny Tiny Pit Orchestra, including San Diegan Gene Perry on percussion and pianist Andrew Infanti. The TTPO has performed thusly behind many other silent-era films in and around San Diego, with a rotating cast of local musicians.

Paulson describes his own performances as “channeling Jerry Lewis.” He frequently enlists the aid of audience members by giving them various noisemakers, such as bulb horns and coconuts.

One of his more offbeat and unique sounding instruments is a forgotten old toy called a Stylophone, an electronic pocket organ roughly the same size as a transistor radio. It was invented by accident in the 1960s in Britain. Brian Jarvis who worked in the recording industry was repairing his niece's toy electric piano, as the story goes, because some of the keys had broken. He somehow learned that the keys could be put on a single circuit and activated by a metal pen, or stylus, to complete the circuit and make a single note.

The kid did not get her piano back. But in its place, what she ended up with was far more entertaining. Friends and family in fact dug the re-worked keyboard to the extent that Jarvis took encouragement and eventually went into business to mass produce his Dubreq (a name derived from the combination of two words: dubbing and recording) Stylophone.

If you listen carefully you can hear the one note on David Bowie’s “Space Oddity,” a glissando followed by a squawk that constitutes possibly the most famous sound in Stylophone history. Kraftwerk would come along later and play more Stylophone on Computer World, and Marilyn Manson used Stylophone on his song “You Me and the Devil Makes 3.”

The gizmo sold three million units before Stylophone furor died down. It was gone from retail shelves by the 1980s, destined to become yet another eBay collectible. Around 2007, the instrument was re-introduced in Britain and enjoyed a small, if steady, resurgence.

“The reissue comes with a much-needed headphone jack,” says Paulson, “and an octave option, and an MP3 jack...that means you can plug an MP3 player into a Stylophone, and play along to your favorite songs through its crappy speaker.”

One round-ish Stylophone in his collection is wired with fairly advanced technology. Says Paulson, “You can make it act like a bass instrument or a drum machine,” and the device has a sampling function as well. “[This one] comes with the pre-recorded voice of MC Zani. He’s the UK Beatbox Champion.”

“It’s something everyone can play. It’s not so intimidating.” After his March 28, 2012 concert at the UCSD Library demonstrating music made on old toy Stylophones, his collection of the offbeat 1970s toys remained on display through April.