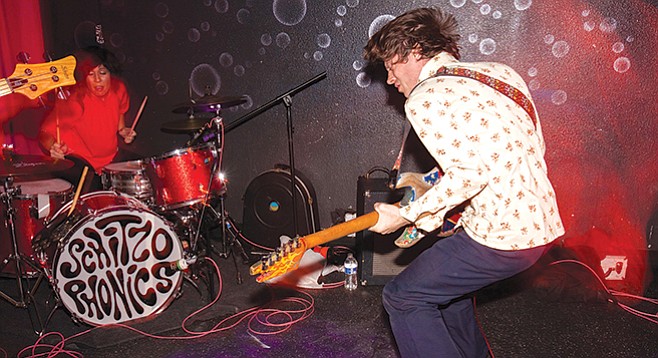 Singer/guitarist Pat Beers has been known to play a custom dinosaur-head Strat. Beers was later joined by his future wife Lety Mora (the Rosalyns), who attended high school with him in Arizona.

They released a debut self-titled album in August 2011. The following year, the Beers' (now married) co-founded Ship Records alongside members of the New Kinetics and musician Spencer Gallop. The first of the label’s quarterly digital compilations, Against the Current, Volume 1, showcases Ship’s roster of local and out-of-town acts, including Shake Before Us and Gloomsday.

The band often plays with former Zero Robert Lopez, aka El Vez: The Mexican Elvis, serving as the back up band for his Punk Rock Review, along with Diana Death as second guitarist. Pat Beers is frequently the touring guitarist for El Vez shows.

"One of our favorite shows was our first time opening for El Vez and the Creepy Creeps," recalls Lety Beers. "This was also one of our first weekend shows playing at the Casbah too so we were super excited! The energy that night was awesome, that's the main maker or breaker with us. We play full speed every time we hit a stage, but the vibe in the room is the main factor of a great night versus a bad one. This was one of those nights where everyone was there to get down and dance up a storm. The Creepy Creeps were insane and then El Vez closed the night with his high kicks, splits, and multi-costumed spectacular. I remember EVERYONE dancing and laughing, it was perfect."

As for their worst gig, "We were having a jam BBQ at our house with a bunch of local musicians and I remember everyone was really grooving. At the time we were playing at Bar 11 all the time, so Pat got the idea to do a big show there with everyone headlining as Super Group Jam Jam. Two drum sets, four guitars, bass, just a cluster of us like we would in the garage. It ended up sounding like what you imagine hell sounds like. It was so chaotic."

Side projects include Bowiephonics, which is Schizophonics plus Diana Death getting glammed out for a fully-costumed David Bowie tribute. The Little Richards sport an all-star lineup of polka-dot studded Robert Lopez (El Vez, The Zeros), Diana Death (Chinese Rocks), Joshua Kmak (Nformals), and Schitzophonics, doing an all-Little Richard set.

The Schizophonics kicked off 2014 with a new single, "Can't Take It," on the Munster label. "It's a three song 7-inch," says Lety Beers. "Pat did the cover art himself, and the photo is a cell phone shot by our friend and fellow musician Angie Walton from Duping the Public at a Tin Can show. These songs were inspired from our summer [2013] tour with El Vez. We did a Spain and Italy tour where we had loads of people asking if we had any vinyl. Along the trip, Inigo from Munster Records was there, and we just got to talking about how much the people there were sill such avid record collectors, and he offered to put out a single for us."

Mike Stax from the Loons also helped with some of the music production. "You can hear his harmonies, hand claps and tambourine on two of the tracks," says Lety. In September 2014, the band was named Best Hard Rock at the San Diego Music Awards.

An album called Land of the Living dropped in 2017 via Sympathy For The Record Industry. They spent early December of that year on a 10-day European tour with the reunited Rocket From the Crypt.

May 2019 found them touring New Zealand as a trio featuring Pat and Lety Beers alongside bassist Blake Lindquist, beginning May 24 in Auckland and concluding June 2 in Gisborne.

Their sophomore album People in the Sky, recorded with Dave Gardner (Hot Snakes, Rocket From the Crypt) and Stephen Kaye (JD McPherson), was preceded by singles for "Battle Line" and "Steely Eyed Lady" before being released on Halloween 2019 via Pig Baby Records. Singles were also released for "Something's Got To Give" and "The One I Want." The album was supported with an appearance at Montreal's Fuzztival and a tour running through October and November (including October 11 at Casbah).

The band toured New Zealand again in February and March 2020, backed by bassist Takumi McIntyre (formerly of the Cavemen).