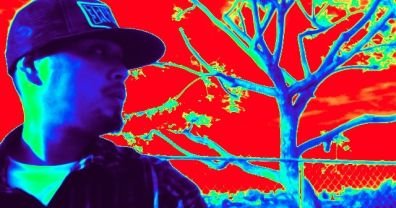 Scvtterbrvin is half-Filipino, half-Mexican rapper and producer Michael Quiñones, formerly known as Scatter Brain the Acid Atheist, who got his start with Masters of the Universe around 2003. That group, which has been around since the early 1990s, has also included his older brother Frankie Quiñones (aka Odessa Kane), as well as former local Gonjasufi, and Genghis Khan, with whom Quiñones produced an album called Night Gallery in 2012.

Quiñones provided some beats for the 2003 Masters of the Universe full-length Nephlim Modulation Systems. Around the same time, he cofounded Kilowattz with Gonjasufi and instrumental beat duo Skrapez, releasing a full-length called Wrought of Chaos.

He also performs with a rap group, Infinity Gauntlet and is influenced by Rob Zombie and Timothy Leary, using Technics 1200 and Pro Tools to record. Under that name in 2009, he released Chasing Victims Through Sound Systems, with Deth Shepard aka Psycho Pop (Skrapez Crew). 2011 saw the release of Madness & Murder Vol. 1 on the Red Lotus Klan label, and in 2012, and he did production work for his brother Odessa Kane (an EP) and rapper Splurgeo.

“If hip-hop is dead,” says Quiñones, “then I’m tagging on the tombstone.”

By 2015, he had released three volumes of his Grand Theft Audio Volume series, with volume 2 only available as a limited edition cassette.