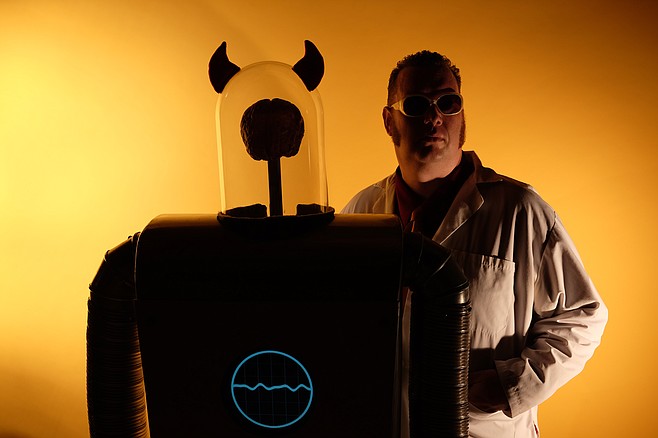 In 1996, SDSU English Department alumni Michael Buchmiller, aka Professor B. Miller, created the robotic sound of the Satanic Puppeteer Orchestra, an electro-experimental duo pairing him with a singing robot he calls SPO-20. Over 20 years later, he was still using old Windows XP programs to synthesize SPO-20’s vocals.

The diode duo has been known to cover material from acts like Andy Kaufman, Talking Heads, Kraftwerk, They Might Be Giants, Blues Brothers, the Cure, Devo, and Spinal Tap, as well as performing original conceptual sci-fi and horror inspired works like "I Stole Your Daddy's Time Machine," "What Is the Most Expensive Way To Feed A Zebra," "Wolfman Rides a Unicycle," and "Haunted Rental Car."

"Our debut album was taught as a multimedia work of fiction to 250 students at San Diego State University, along with works by Kurt Vonnegut, Rene Magritte, Robert Louis Stevenson, and [cartoonist] Dan Clowes," says Miller. "We played for more than 10,000 people on Halloween for Heaven and Hell at the Del Mar Fairgrounds." A self-titled four-disc set was released in 2008, they were nominated Best Electronic at the 2009 San Diego Music Awards, and an album called Experiments with Auto-Croon came out in 2014.

Miller announced more new works in summer 2018. "The robot and I are heading into the studio next month to start recording a series of themed EPs. Probably 20 or so. The first wave will likely come out at the end of the year. I've got names for all of them, lyrics for most of them, and album art done for the first two EPs." The first release appeared in November 2018, the Stop by the Supermarket EP.

A new video appeared in early 2020 for their track "Abraham Lincoln," from their album Conjure the Paranormal.