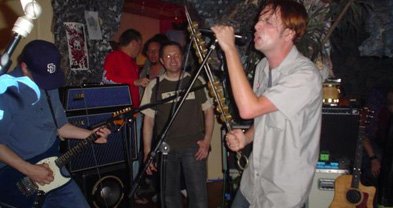 RIYL: Alice Bowie from the film Cheech and Chong's Up in Smoke

In early 2007, a song by the reunited Sassy MoFoS was ranked number 3 (of around 6100) on the alt-punk chart at www.soundclick.com.

"It's called 'You Smell like Something I Wouldn't Want to Touch (But I'm Touching You Anyway),' " says singer Slikker Dee. "Our guitarist Slappy Tee used to be married to an aspiring documentary director who was working undercover at a chicken-processing plant. She came home one night and passed out and, according to Slappy, the stench was horrendous.

"Not only had she spent the afternoon with slaughtered chickens and their entrails, but she'd had too much to drink and had hurled on herself. Slappy says she still looked amazingly hot, though, sprawled across the coffee table with her hairnet slightly askew. He'd been drinking, too, and doesn't remember much after that, so some of the song is a dramatization of what he thinks went on the rest of the night. He swears that, to this day, the smell of chicken bouillon gives him an erection."

Inspired to form in 1991 after a Mojo Nixon concert, the Sassy MoFoS made one Mojo-esque album before disbanding. Dee -- whose day job is selling solar panels -- explains how the band reunited.

"I got a call from Slappy Tee, and he asked how I'd feel singing, 'I might take it in the pooter from a man they call Scooter, but I won't be Dick Cheney's bitch.' Well, after I picked myself up off the floor, I said, 'I think the Sassy MoFoS are officially back in business.' "

The band's reunion album Sassy Is the Night was released in early 2007.