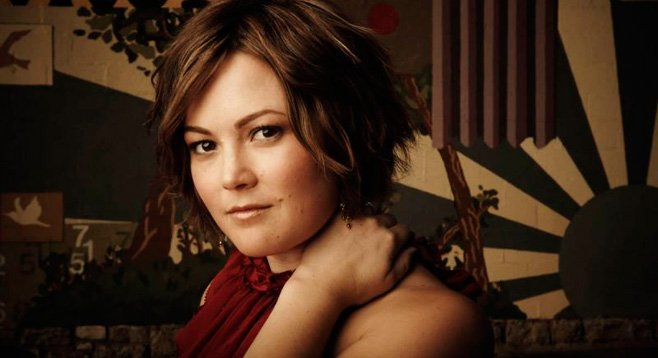 Watkins’ skills as a vocalist and songwriter are accentuated on this solo project. She wrote or co-wrote eight of the 14 tracks on the record, which also includes interpretations of songs by Norman Blake of Teenage Fanclub, Jon Brion ("Same Mistakes"), David Garza, John Hartford, Jimmie Rodgers ("Any Old Time"), and Tom Waits ("Pony"). Her album also features Nickel Creek bandmates Chris Thile and Sean Watkins.

So how weird is the John Paul Jones angle? "It’s a polar opposite connection," says local music historian Bart Mendoza, "but Jones has previously worked with another artist with San Diego connections, Diamanda Galas."

When not on the road or in the studio, Watkins guest-starred as fiddler and/or harmony vocalist on albums by Bela Fleck, the Chieftains, Ray LaMontagne, Ben Lee, Dan Wilson, Richard Thompson, and Alex Woodward, among others.

Other members of Nickel Creek, Sean Watkins and Chris Thile (with the Punch Brothers), have also released solo records.

She guest hosted Prairie Home Companion on January 15, 2011, one of only three times in over 35 years that show founder Garrison Keillor had not hosted himself. The 68 year-old Keillor hinted that Watkins may replace him on the long running PBS program, telling reporters “She did great, I think she would do even better next time.” He praised her “youth, beauty and bare shoulders...then, if you can play fiddle, too, and sing.”

In spring 2011, Watkins was aboard the Delta Airlines 737 jumbo jet forced to make an unscheduled landing due to a potential security threat (a suspected bomb), diverting the Detroit-to-San Diego flight to Albuquerque, New Mexico. On June 7, she and fellow Nickel Creek alum Sean Watkins made a surprise appearance onstage with Lyle Lovett and John Hiatt at Humphrey’s in San Diego.

Her full-length Sun Midnight Sun was released on the Nonesuch label in May 2012. Her concert set opening for Jackson Browne at the Paramount Theatre in Denver, Colorado on November 14, 2012, was broadcast live on AXS TV.

In summer 2013, her song “Central and Union” was heard on The Lone Ranger Wanted: Music Inspired by the Film, which also includes music by Dave Alvin, Iggy Pop, and Pogues frontman Shane MacGowan (whose teeth were once spoofed in Mojo Nixon's song “Shane's Dentist”). The following year, she was heard on the album Looking Into You: A Tribute to Jackson Browne, alongside Bruce Springsteen, Bonnie Raitt, Don Henley, Ben Harper, and more.

Around the same time, Sara Watkins co-founded a new trio with Sarah Jarosz and Aoife O'Donovan, I'm With Her. After touring in 2015, the trio remained inactive until the summer 2017 release of their first original song, "Little Lies," followed by a tour through mid-August with the Punch Brothers and Julian Lage for the inaugural American Acoustic tour.

Watkins' 2016 album Young In All The Wrong Ways was produced in Los Angeles by Gabe Witcher who put together a band that included two of his fellow Punch Brothers, guitarist Chris Eldridge and bass player Paul Kowert, and musicians Jon Brion and Jay Bellerose. Sarah Jarosz and Aoife O'Donovan, Watkins' bandmates in I'm With Her, provide harmonies on the title track, while Jim James of My Morning Jacket guests on "One Last Time."

In September 2016, Watkins was named Instrumentalist of the Year at the Americana Music Association’s 15th Annual Honors & Awards.

Summer 2017 found her new trio with Sarah Jarosz and Aoife O'Donovan, I'm With Her, releasing their first original single "Little Lies," with a video shot by Todd Cooper. They toured through mid-August with the Punch Brothers and Julian Lage for the inaugural American Acoustic tour. Their debut album, See You Around, on February 16, was recorded at Peter Gabriel's Real World Studios in Bath, England and preceded by the single "Overland" and a performance video for the title track.