Santa Claus plays old school crossover/thrash music. Formed in June 1985 as a cover band, by the end of that year they were introducing original material to their setlists. They went on to open for a number of touring punk and metal acts, at local venues like the Adams Avenue Theater as well as Tijuana and elsewhere, as well as performing live on SDSU's KCR radio station and at 1985's Linda Vista Multi-Cultural Fair.

Their demo tape Here Comes Santa Claus was released in summer 1986, followed by a Rocks In Your Stocking demo tape in summer 1988. An unofficial two-song recording, The Frank Sessions, was distributed locally during spring 1992, earning airplay on 91X's Loudspeaker program. A self financed CD was in the works in 1995, titled ALTERed NATIVE, but lineup changes postponed the project, which was not completed due to the dissolution of the band on June 1, 1996.

The band was relaunched in November 2014. 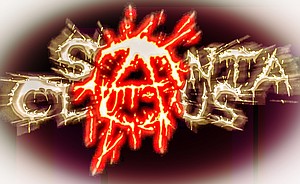