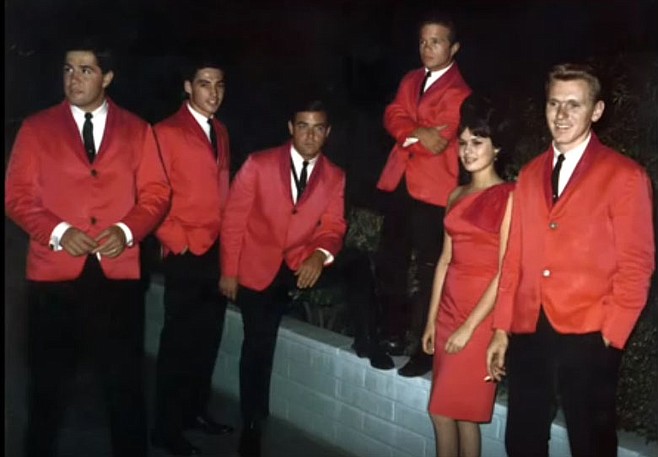 RIYL: The Cascades, the 7 Sons

The Accents got their start when guitarists Frank Mannix and Don Lovas met as they were both hired to fill in for other members of a band called the Shadows in early 1962. Frank was just 14, Don 17, but both were already veterans of other bands. Mannix was in the Vibrants with a singer named Linda Young, and Don had his own band, the Galaxies, with drummer Tony Johnson. Things just clicked between them, and these four soon left their respective bands to form a new band they called the Accents. Frank began to book the band for dances at public and private schools and various church youth groups.

In the summer of 1962, 17-year-old Gabe Lapano moved to San Diego with his family. He enrolled at Helix High School, the school Linda Young attended. During that first fall semester, Gabe caught Linda’s attention as he sat playing the piano in the choir room and she asked him if he wanted to stop by one of the Accents’ rehearsals.

Gabe brought his Wurlitzer electric piano over to Tony’s parents’ house, where the band rehearsed in the living room. Like Don, Frank, and Tony, Gabe was already a seasoned musician and singer, having played consistently since the age of 14 with well-known bands in the Spokane area. As the Accents had no male vocalist, Gabe’s pure, high tenor was a needed, and very welcome, addition.

Shortly thereafter, Linda had to leave the band because of health reasons, so the four-piece early core of the Accents was now set. The band was gigging steadily and in 1963 expanded the roster by adding Don Beck on tenor saxophone.

At this time Doug Meyers was in the horn section of San Diego’s most prominent band, the Nomads, who played every Wednesday night during the summer at the La Mesa Youth Center. This was a big, rocking band with multiple singers and four or five horns doing choreographed steps. For reasons that no one seems to remember clearly, Meyers left the Nomads and joined the Accents, and Beck left the Accents and joined the Nomads. There were no hard feelings on either side, however.

Another band on the scene at the time named the Valiants featured a female vocalist named Sandi Rouse. Meanwhile, the Accents had decided to add a girl singer to the band, and made an announcement about upcoming auditions at their Sunday dance. A friend of Sandi’s convinced her to give it a try, although she felt torn about leaving her group.

After joining the Accents, she was an immediate hit with the fans. The band’s repertoire could now be expanded to include songs that became favorites of the dancers, such as “Heat Wave,” “Be My Baby,” and Ike and Tina Turner's “A Fool In Love.” She also joined Gabe for duets on songs like “Unchained Melody” and “Goodnight, My Love.”

A small record company soon was interested, and the band traveled to record at a top L.A. studio. The result was their first single, “Better Watch Out Boy,” a song composed by one of Sandi’s acquaintances, George Semper. The record climbed to the top 10 in San Diego and top 20 in L.A. and a few other major cities.

They followed this with “I’ve Got Better Things To Do” in 1964, written for Accents by the L.A. team of PF Sloan and Steve Barri, the composers of “Eve of Destruction” and “Secret Agent Man.”

PF Sloan recalled for the Reader “They called and asked if I’d write a song and produce a record for them. I was about nineteen and my bosses in L.A. couldn’t understand why I was going down there. San Diego was considered creatively untouchable, mainly due to provincial thinking on their part.”

Of the group, he remembers “Sandi [Rouse] had a really lovely voice and the band came up with some great guitar parts…Some of the members later went on to become the Wondermints,” he says, referring to the ensemble who eventually became Brian Wilson’s backing band.

“What Do You Want to Do” and “On the Run” were the next releases, both written by the Accents’ own Gabe Lapano. All of these were top 20 singles in Southern California.

But by the summer of 1966, it was time for the Accents to move on. They had offers of record deals from big labels but had not been comfortable with the virtually total control the companies sought over their bookings and image.

An August 1966 farewell show came to a close as Sandi and Gabe, for the last time, sang the Jesse Belvin classic, “Goodnight, My Love.”

"Before you go, there’s just one thing I’d like to know...

Is your love still warm for me, or has it grown cold?"

As the crowd slowly left the hall, the band began to pack up their gear. When the big dance floor was empty and silent, the band members drove off into the night...the dancing, the summer, and an era, had come to an end.

Gabe Lapano also played with another successful local 1960s ensemble, the Cascades (who achieved a worldwide hit with "Rhythm of the Rain"), as well as fronting The 7 Sons. Essentially a one-shot Lapano project, the 7 Sons released one single in 1967 on VTI Records, "On the Run," produced by Al DiMartino (producer for both the Cascades and the Accents) and John Gummoe (original Cascades singer).

On September 15, 2007, a version of Sandi and the Accents performed a reunion concert at the Scottish Rite Center in Mission Valley. Around the same time, the band announced plans to record a new CD, to include all four of their singles plus 14 tracks recorded live in 1964 and 1965 at local venues like downtown's Community Concourse.