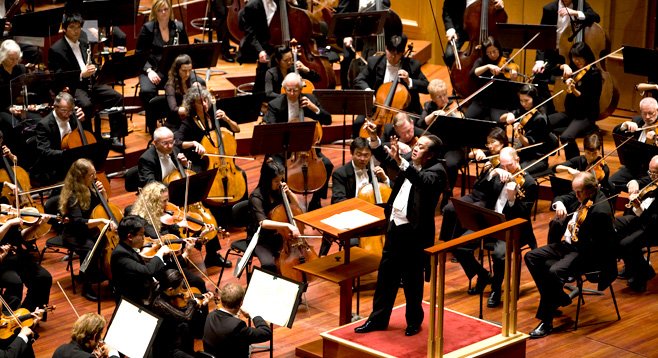 San Diego's Symphony Hall opened as the Fox Theatre on November 8, 1929, about 20 years after the first concert was given by the so-called San Diego Symphony Orchestra. It took until the mid-1980s before the San Diego orchestra had its own home in what was renamed Copley Symphony Hall.

In Summer 2007, the San Diego Symphony joined with Classics for Kids to form Tempo Alliance -- Transforming Education through Music Performances and Outreach -- to focus on local arts education. "Its purpose is to develop and cultivate the next generation of audiences, while instilling a greater appreciation of classical music and creating an arts curriculum that contributes to a more well-rounded education," according to Adrienne Valencia, director of education and outreach. “The symphony is increasing its commitment to educating our young people. It is our vision to reach all segments of San Diego through meaningful programs that serve the needs of the community.”

Also in mid-2007, the symphony partnered with InstantEncore.com to offer live recordings of its concerts as digital downloads. The first orchestra to join InstantEncore, the SDS started by offering a live recording of Schumann's Symphony No. 2 for $3.59.

Average attendance at Copley Symphony Hall dropped from 68 percent to 62 percent between 2005 and 2007. SDS administrators hope the Web concert will boost in-person attendance. They hope to soon have 30 concerts online, and there are plans to stream live concert performances as they happen.

In Fall 2007, San Diego Symphony music director Jahja Ling renewed his contract for another four years. The Indonesian musician became the SDS music director in 2003, after a nearly two-year international search. His first season was as music director designate, before he took on full conducting and administrative duties in Fall 2004. He was formerly resident conductor of the Cleveland Orchestra (1985-2002), and director of its Blossom Festival (2000-2005).

In August 2009, the Symphony released an album, Never Far Away, featuring a world premiere performance on CD of Bright Sheng’s “Never Far Away,” his harp concerto especially written for the soloist on this recording, Yolanda Kondonassis. Recorded in January 2009 at downtown’s Copley Symphony Hall, all selections on the CD were conducted by San Diego Symphony Music Director Jahja Ling.

The Lang Lang Concerto Festival in early 2011 (January 21 - 23) sold over 2,300 tickets over three days, resulting in the Symphony’s best three-day weekend take ever. Later that year, Ken-David Masur was appointed assistant conductor on a full-time basis. Masur previously served as the San Antonio Symphony Resident Conductor, and the artistic director of the Chelsea Music Festival in New York City.

In October 2012, the Symphony was awarded a $580,000 grant from the James Irvine Foundation, to fund a 2013 program called Your Song, Your Story. According to a statement from Symphony management, “During this year-long program, residents of traditionally under-served San Diego neighborhoods will contribute their shared poems, stories and songs to an original multi-media piece, commissioned by the San Diego Symphony. The final product will be presented to the wider San Diego community in summer 2014.”

Symphony CEO Edward Gill commented on Your Song, Your Story as a continuation of the work the orchestra is already doing in the community. “We are proud of the strides that the San Diego Symphony has made in the arena of civic and cultural engagement throughout the past few years. This grant from The James Irvine Foundation will help us to make even greater achievements that will affect our community and its citizens for years to come,”

The piece will eventually be played at symphony hall and also at block parties within the communities that contributed to the composition. The scope of the piece extends beyond just the orchestra. Dance troupes and indigenous instrumental groups are also part of the planning.

In late 2012, the Symphony was awarded a $580,000 grant from the James Irvine Foundation, which funded a 2013 program called Your Song, Your Story. Around the same time, film composer Bill Conti (whose scores include the theme from Rocky) was named the Symphony’s Principal Pops Conductor.

The orchestra's chief executive officer Edward “Ward” Gill, who had held his position since October 2003, announced he'd leave the organization in September 2014, having overseen the Symphony's 2014 Carnegie Hall debut and a tour of China.