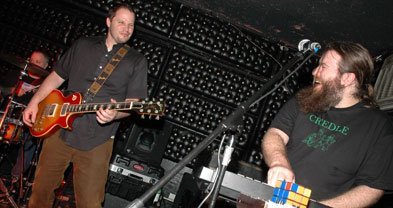 The San Diego Music Awards: The band, not the oft-ridiculed local popularity poll. “Truthfully, it’s not much different than an extension of Creedle,” says guitarist-vocalist Devon Goldberg, who lives in Queens NYC and hosts a Sunday soundtrack specialty program Morricone Youth on Manhattan’s East Village Radio.

As for the band’s all-original material, “This new stuff is all over the place. Over half are instrumentals. I sing a bunch, Rob sings a bunch...”

Yes, The SDMAs — mandatory upper-case T — marks yet another group for Rob Crow, the SD singer-guitarist-etc. known for his many bands, from the seminal Heavy Vegetable over two decades ago, to today’s internationally successful Pinback. (An intro to his free-form-radio podcast Rob Crow’s Incongruous Show makes light of same, rattling off various incarnations: “Whether you know him as ‘the fat one in Pinback’ or ‘San Diego’s foremost overrated indie-rock man-child’...”)

Crow, an enthusiastic Creedle fan from their 1991 inception through ’98 breakup, has become part of the band in recent years, regularly playing — and encouraging — Creedle’s semifrequent reunion gigs. Along the way, he and Goldberg began writing songs for the new project, which also includes familiar core Creedlers Tim Blankenship on bass/vox, drummer Dion Thurman, keyboardist Chris Fulford-Brown, and saxist Gabe Sundy.

Crow himself calls the band “An excuse for us old-punk music-nerd friends to hang out and play complicated, surreal, and sophisticated music while drinking...this is in no way a jam band and any explorations are kept to a minimum”

But, the name? “Rob’s idea,” chuckled Goldberg. Essentially, it seems to be a playful moniker, acknowledging how some older scene vets still refuse to take the (lower-case t) San Diego Music Awards too seriously — and who recall when the SDMAs were regarded by many as a cheesy joke in itself.

“Once we get the cease-and-desist from [non-band SDMA founder-president] Kevin Hellman,” he continued, “maybe we’ll change our name to SLAMM.” He references SD CityBeat publisher Hellman’s forerunner ’90s publication, ridiculed for having ignored local alt/punk bands while, curiously, running cover stories on a Hellman-guided act — and regular early-era SDMA nominee — like Natasha’s Ghost.

The band made its live debut in March 2011, whereupon Goldberg told the Reader “We’ve already partially recorded 16 songs for an album, but most have only working titles that might change.” The sound is, as expected, eclectic: tracks range from something suggesting a surf-metal makeover of an Erik Satie-ish classical piece, to a Melvins-style tear through an Astor Piazzolla tango.