The Gay Men's Chorus of San Diego was founded in October 1992 by 11 members of the San Diego Men's Chorus who wanted to sing in a self-identified "gay" chorus. The Chorus was incorporated in January 1993, and began rehearsing in the Great Hall of the Cathedral Church of Saint Paul on Fifth Avenue, under the baton of Gary Holt. Within the first year, the membership tripled to over 30 singers, and San Diego's newly elected mayor, Susan Golding, invited the new gay chorus to be the opening entertainment at her gala celebration inauguration.

The Gay Men's Chorus of San Diego applied for and was granted city funding after only one year of existence, with the review panel specifically acknowledging the chorus for having "...measurable goals and objectives and a well-known Director with a reputation for quality work." In December 1993, the Chorus presented its first public concert, "Don We Now..." at the Park Boulevard United Methodist Church before a standing-room-only audience.

In 1995, partially as a means of addressing through music the loss of three members to AIDS in a six-month period, the Gay Men's Chorus of San Diego undertook its most ambitious project since its inception: a concert featuring the seven-movement work "Hidden Legacies" by Roger Bourland and John Hall. That performance took place at the University Christian Church, a new venue for the Chorus, which in itself represented a breakthrough for the gay community.

After decades of choral experience that included singing with the Tucson Boys Chorus and at Interlochen Center for the Arts in Missouri, Gary Holt became artistic director for the group now known as the San Diego Gay Men’s Chorus in 1986. The Coronado resident explains, “After I first sang with them, they had to replace the conductor. I stepped in on an interim basis while they did a national search. I had such an amazing time, I threw my hat into the ring.

“I [collaborate] with other organizations and programs that help our singers improve. The project I’m most excited about is our anti-bullying mini-musical, an adaptation of Tomie DePaola’s book Oliver Button Is a Sissy. We’re raising funds so we can send that program into San Diego County elementary schools.”

Why do we need a gay men’s chorus?

“Our music is something our singers couldn’t access in a mixed chorus. There isn’t a lot of great men’s choral repertoire commercially available. So we commission it. Some of the greatest modern American composers — Ned Rorem, Libby Larsen, John Corigliano — have written music at our request.

“Gay choruses are agents and advocates for social change...whether we’re singing about marriage equality, bullying, or the struggle for basic civil rights.”

Does the SDGMC ever get outrageous?

“Camp is a healthy part of our well-balanced diet. Sometimes it looks like Priscilla, Queen of the Desert on our stage. My responsibility is knowing where to draw the line — I always come down on the side of less camp. There may be an occasional member dressed as an iconic woman. For last year’s holiday concert it was Norma Desmond. In Guy Tunes, I think Queen Elizabeth makes an appearance with Henry the Eighth. And I have it on good authority that the Village People characters will pop in.

“I have what I call my ‘grandmother test.’ If I wouldn’t be comfortable with my grandmother in our audience, then it doesn’t belong in our concerts.”

At the end of 2013, RC Haus, music program director for the Rancho Santa Fe School District, was announced as the group's new Interim Artistic Director, with his tenure to include conducting the ensemble’s spring event Wow! The Chorus Sings the ‘90s. Haus has previously held the position of Assistant Artistic Director for the Chorus.

Check out our YouTube Parody Video. Here's the SDGMC link to our "Call Me Maybe" premier video!!! 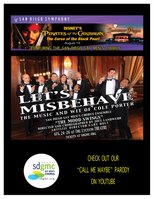