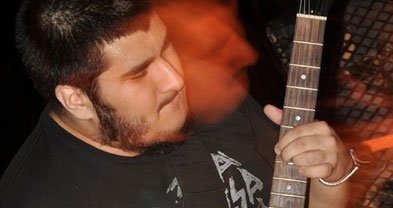 “I haven’t gotten any heat from the Gabor estate yet,” says one-man band Samuel Lopez of his noise-artist alter ego Zsa Zsa Gabor, who doubts anyone will mistake him for the cop-slapping Hungarian actress whose name he co-opted. “What I do is perform with prerecorded found sounds and a synthesizer running through effect pedals that I manipulate to create harsh noise. I also use samples and, although I don't have lyrics, each track has its own story. It's sort of like scary movie soundtrack music.” He says getting gigs is so hard that “Sometimes I have to lie and say I’m indie rock.”

Lopez recalls going over poorly at O’Connell’s. “I sensed bad vibes in the joint the minute I walked in…I played about 15 minutes before the owner madly stumbled over to me, spittle flying from his mouth, hands over ears, screaming ‘Enough, it's over! Turn it off!’ I can't believe I made it that far. There was this inebriated-looking gentleman standing next to my equipment the whole time I was playing and I seriously thought he was going to take a swing at me. Right after the owner unplugged me, another intoxicated patron lamented that he couldn't believe he turned the Rolling Stones off the jukebox for me.”

Guitarist/drummer Lopez wrote and sometimes performs (with his vocalist/bassist wife Mandy Galarza) a self-described “sludge opera” called The Blind Dead. “Esteban [Flores] sings. It’s got six acts. We recorded it, but we don’t know what we’ll do with it.”

“I call it a Sludge Opera because the music is thick and lugubrious,” says Lopez of the elaborate sci-fi production. “The opera part comes in because there are different acts. It’s a journey through the inner circles of hell.

“The story involves a violent death clan that massacres a whole village, leaving their victims eyeless as a calling card,” explains Lopez. “In hell, there’s a battle between the eyeless dead and the black gods. The gods, bent on destruction, allow the blind dead to return to the world seeking revenge. The final act is the blind dead, thirsty for blood, taking revenge.”

The Blind Dead: A Sludge Opera was first staged July 11, 2009, at the Ché Café. The five-person operation featured Lopez playing the part of the death clan, his wife Mandy Galarza singing the lament and casting the revenge hex, Michael Zimmerman playing the blood organ, Art Ulloa on drums and percussion, and singer Esteban Flores closed the show as the Blind Dead Chorus.

Although Lopez reveals that when he plays guitar he uses a human skull he bought off eBay instead of a pick, there is little to suggest that his Mission Valley condo is a stronghold for dark and disturbing metal music. There’s a homey vibe about the place. Lopez’s wife mandy is somewhere in a back bedroom tending to their teething baby, and while a pot of spaghetti boils on the stove (“Meatless, just so you know,” says Lopez), he and Esteban Flores talk doom and sludge.

“We actually got together through the noise scene,” says Flores, a guitarist-composer who as of late 2010 lives in Chula Vista and works at Sears.

Lopez, at the time a mortgage lender by day, breaks it down: “There’s stoner doom, stoner rock, doom, sludge, and then noise.” What makes it doom? “It can be a musical thing or it can be an aesthetic thing. Traditionally, doom bands would use down-tuned guitars, like, anything lower than D,” or a full step below standard E tuning.

“You get down to B and A [tuning],” says Flores, “and that’s doom right there. In sludge, we don’t care about tuning.” They both laugh.

“How does it feel to play doom guitar? Pretty bad-ass,” says Flores. “If you tune to open C and play [a power chord], it sounds so awesome and it’s so simple to do. It sounds so much better than, like, an augmented E chord.”

Does one even need to know how to play guitar in the traditional sense, then, to make passable doom/sludge/noise rock?

Lopez says yes, that an understanding of timing is crucial. “Chords are very important, too,” Flores says. “But they don’t have to be standard chords. They can be...just...whatever.”

He says that doom is gaining popularity. Flores talks about Murderfest, held in 2009 at the Los Angeles Knitting Factory, now closed. “There were a lot of doom bands there...I have a feeling that San Diego is going to start getting more doom bands.”

Lopez also serves as curator of the San Diego Experimental Guitar Show. “A few years ago, there was talk in certain music publications about the death of the guitar. Notions were made that this archaic instrument was no longer a relevant tool for creating music. As a guitarist, I took offense to this statement. Since I curated noise shows, and had friends who played a similar style of noise guitar, I decided to fight back this inanity with a sonic extravaganza that would prove that the guitar was still a force to be reckoned with.”

“The first San Diego Experimental Guitar show was created in response. I got all of my noisy guitar friends together and we played and we had a blast! But, something very interesting happened - other people liked it and had a blast too. These were people who may not have necessarily already been involved with the noise or experimental music scene. They had found the performances fresh and unique and a true alternative to what they were used to hearing or seeing.”