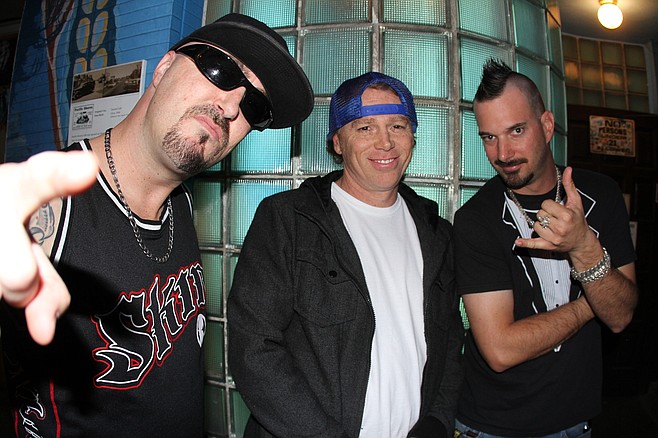 Safety Orange was founded by singer/bassist Sol Turpin (40 Oz to Freedom), a San Diego native, with guitarist/vocalist Greg Karlo (who once played with Turpin in a Cure tribute band), along drummer/vocalist Eric Rockwell. Their debut full-length Life as a Fish was followed by Troll Rock High and extensive touring. Something that's not always as fun as it sounds.

"We were in Vegas for three nights at Hennessey's on Freemont," recalls Sol Turpin, "and I was really sick. I did okay the first night, but the next day I woke up with no voice, literally just a whisper. Rather than cancel, we waited, thinking my voice would come back. No such luck, so we ended up doing Safety Orange Karaoke, where we played and fans and friends came up and sang for me. Actually, that turned out to be a pretty fun night, but it definitely sucked not having my voice. That was the first and hopefully last time I've ever lost my voice at a show."

As of 2012, the band sometimes had an alternate drummer, Los Perez. They have scored sponsorship deals from companies like Jagermeister, Aedik Clothing, and others. Their third full-length State of Where I Am was released in 2013 on their own Wabasa Records label (founding singer/bassist Sol Turpin’s middle name is Wabasa). The album included a cover of a song by the Cure.

As of 2019, the band had distilled down to a trio featuring Sol Turpin, Greg Karlo, and Mower drummer Jessie "Tato" Tate. They released a video for their track “Grin on My Face” and a single for “Better Now” that was featured on Spotify’s Reggae Summer Beach playlist.