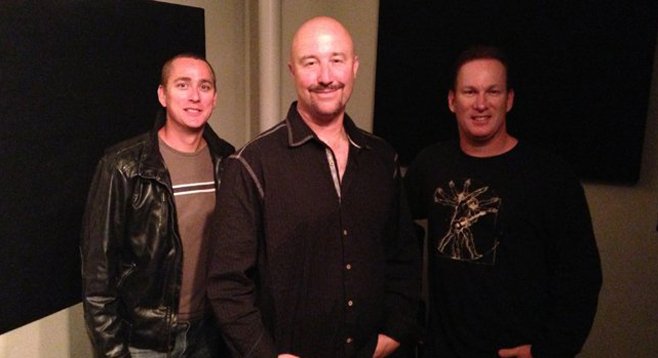 “I logged on to CNN.com,” says Brian Moore, “and I saw the announcement that Rush had been inducted into the Rock and Roll Hall of Fame and I thought, I must be on another planet.” Moore plays bass in Rushed, a local Rush tribute act. Rush were inducted into the HOF in April 2013.

“A lot of people are asking when our next show is,” says Rushed drummer Troy Molsberry, “and I wouldn’t be surprised if this is coming as a result of the Hall of Fame induction.”

Things are otherwise looking up for the local trio. “L.A. County seems to be the land of Rush tribute bands,” says guitarist Kent Malberg.

Why does he think Rush was denied the honor for so many years? “It goes to the whole music-critic snobbery thing. They mock what they don’t comprehend.” What’s not to comprehend about more than 40 million albums sold worldwide? “Exactly,” Malberg says.

But there are haters, too, says Molsberry: “People that, for whatever reasons, think it’s not cool to like Rush.”

Rushed is a relatively new band with a scant handful of live gigs performed during the two years they’ve been public. “But we’ve probably been doing Rush songs together with a computer in Kent’s living room for 12 years,” says Molsberry. Surely Rush can’t be an easy band to pay tribute to. Brian Moore agrees.

“There’s a bit of a learning curve,” says Moore. “If you go out and try to play Rush and you haven’t done your wood-shedding, you’ll end up having a train wreck.”

“When you try to pull off Rush,” says Molsberry, “you’re up there without a net. One stumble and you derail.” The most challenging Rush song to play? Molsberry says, “All of them.”

Moore says Rushed covers what they describe as the Rush golden years: “1974 to 1981. The cool thing about doing Rush is that those guys aren’t characters that you have to get into. You can just concentrate on the music. That takes care of everything,” he says, “the music.”