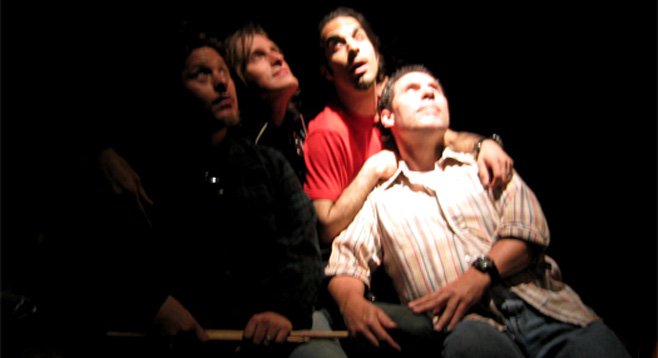 Current Status: On and off.

Starting as classmates at the University of San Diego, the Rugburns formed in the mid-1980s. In the late '80s and early '90s, singer/guitarust Steve Poltz and guitarist Robert Driscoll played as an acoustic duo in various coffeehouses and bars, including the Blarney Stone Pub, Innerchange Coffee House, and Java Joe's. Poltz wrote most of the songs, with Driscoll contributing several songs. The group released several self-produced cassette tapes.

After augmenting the lineup with bassist Gregory Page and drummer Jeff Aafedt, the group signed a contract with Bizarre/Planet Records in 1992. Poltz and Driscoll remained as the original core of the band. After working for two years, the group released their major label debut with Morning Wood. "Me and Eddie Vedder" would go on to be perhaps the most recognizable track on the album. The song was a raucous meditation on the glorious possibilities of overdosing in a hotel room alongside Eddie Vedder.

The band released one more full-length album in 1995. Taking the World by Donkey featured a generous helping of acoustic guitars spiked with ridiculous lyrics. Some of the humor of the first record was replaced with darker themes. "The Ballad of Tommy and Marla" tells the sad tale of a couple that becomes hooked on crystal meth.

To promote the album, the band filmed a long-form video around town, narrated and hosted by street musician Wild Man Fischer, a former protoge of Frank Zappa who was living in various downtown San Diego flophouses at the time. The video only aired once, on a local public access station, and is highly sought by fans of both the Rugburns and Fischer.

After a few years of touring, Driscoll left the band to get back to teaching, his first profession. Steve Poltz dated singer/songwriter Jewel, co-writing some of her biggest hits (including "You Were Meant for Me," for which he co-starred in a video) and playing lead guitar on her Spirit World Tour in 2000.

Through the late 1990s, the Rugburns lineup changed several times, always with Steve Poltz as the lead singer and songwriter. Eventually, the band faded away, other than occasional performances, in favor of Poltz's solo career.

They played a surprise reunion set on January 11, 2013 for the final night of Java Joe’s concert showcases in its current (now previous) locale, which was ending due to the owner closing the surf shop.

A three-night reunion set was staged June 23-25 in San Diego. "We decided we wanted to play a show, because John Castro was gonna be in town from NYC," Poltz explained to the Reader. "It started as a lark with only twelve days notice. So I called Tim Mays and he said he could do it at Bar Pink. The show sold out that day so we decided why not play a show for Java Joe and just have more fun. But then that sold, so we added another at Joe's and that sold out. That's all we can do, because John has to get back to NYC and Stinky back to Sacramento. I'm on tour in Canada right now and fly in the day before the show. Doc lives in Oceanside, so that'll be an easy jaunt for him. I'm looking forward to the fun. We haven't played three shows in a row in a very long time, so we should be extra stupid by the third one."