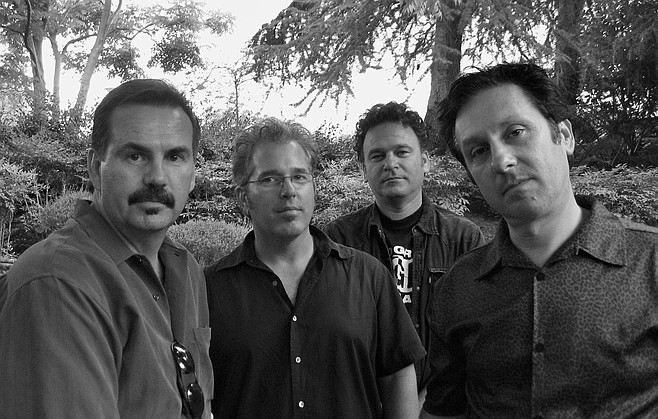 The glam-minded quintet Roxy Monoxide played power pop with a retro-’70s sound heavily influenced by British glitterati such as Slade and the Sweet, early new wavers like Blondie and the Pretenders, and bubblegum blasters by the likes of Cheap Trick and the Raspberries.

Chicago bred singer/guitarist Scott Samuels (formerly of local band Kitten’s Pharmacy), who collects music gear, recalls his early non-music gigs. “I worked in a factory that packaged cough medicine for the military. My job was to glue together cardboard boxes and fill them with cough syrup. I lasted one day.” He also produced a cable public-access show in the late ’70s called Minority Derelict Wrestling.

The original Roxy Monoxide was formed in 2000, by Samuels and singer Tracy DeZenzo, with original members Jim Stuart on bass and Michael Rennie on guitar (Rennie -- no relation to the actor -- for years had the high score on the Casbah’s Galaga game).

Shortly thereafter, Stuart was replaced by Dave Farmer. After DeZenzo departed in 2005, female singers for the group included Diana Sun (who stayed for around two years), Coree Levee (around three years), and -- briefly - Laura Roppe.

Coree Levy left to attend chiropractic school in L.A., while former bassist Dave Farmer was a realtor by day. Farmer was replaced by Darko Petrovic. “I served one year in the communist People’s Army Signal Corps, in the former Yugoslav Republic of Macedonia,” says Petrovic. As for his own earliest non-music gig, he recalls “I was once a collection rep for a small auto-finance company, surrounded by people with bad attitudes, calling on people with bad credit.”

“Michael Rennie left the band in 2009 to form Rio Peligroso, and was replaced by Dave Gladish on guitar, in the midst of recording the CD Another Day, Another Episode,” says Samuels. “After Dave left he was replaced by Tim Bennett, who came over from my other band, A.M. Forever [later known as Vinyl Pirates]. By that time, Coree had departed, and I was doing all the vocals.”

Some were surprised to find the band no longer female-fronted. “I’ve always shared lead vocals, singing about forty percent of the material, most of which I write anyway, so it’s usually well-suited to my voice,” Samuels told the Reader. “When we played the International Pop Overthrow at O’Connells, I initially told the organizer that we were going to perform without Coree, and he was really surprised and somewhat skeptical. But we made a believer out of him and everyone else.”

Samuels recounts the band's worst gig: “We played at the Belly Up in March 2005, on a local band night, and about 40 people from my old workplace came to see us as a surprise. They all showed up too late, though, and the booker thought they had come to see the band that followed us. So the OTHER band wound up with a prime Saturday evening slot out of the deal.”

Their album Another Day, Another Episode was released in October, 2009. However, having weathered a dozen lineup changes over nine years, the band split in December 2010, with a final gig on December 18 at Humphrey’s Backstage Lounge. Singer-guitarist Scott Samuels concedes they failed to reinvent themselves following the departure of frontwoman Coree Levy.

“After a few bad gigs, we realized how difficult it is for people in our age group — 40s and 50s — to come out and listen to bands play original music. Also, [bassist] Darko came back from Serbia and had a great time playing with his old blues band over there and decided he needed a change. So Scott [Southwood, drummer] decided that, after four bass players, four vocalists, and three guitarists, he didn’t want to stick around bringing yet another player up to speed.” Rennie and Petrovic later played together in Rio Peligroso.

Samuels co-produced the first San Diego Big Stir pop music festival on January 30, 2015. "I wanted to put together a power pop show putting together several acts from San Diego that played the San Diego International Pop Overthrow in 2014, sort of a one-night, mini version of that festival, so I invited my friends Steve Rosenbaum and Pete Bayard [Super Buffet] to participate. I approached Larry Fox, owner of the Chico Club, and a great supporter of the power pop scene in San Diego, and he agreed to have his bar host the event, and then Steve Thorn of the San Diego Troubadour, another power pop enthusiast, offered to emcee the show."