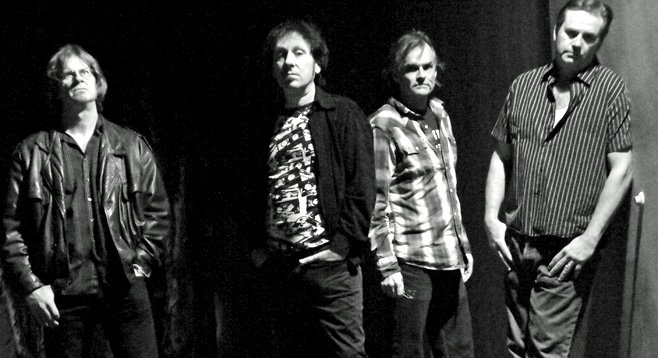 Roxy Dioxide was founded in 2011 by vocalist/guitarist Scott Samuels and Tim Bennett, both of A.M. Forever and Roxy Monoxide. Early members of the band also included singer/bassist Mell Schaer (formerly of 8 Track Star and Gunner Jump) and singer/drummer Jaime Ojeda (formerly of Stonewolf).

“Roxy Dioxide is the next chapter,” explained Samuels. “While Roxy Monoxide was focused primarily around my original compositions, Roxy Dioxide heavily emphasizes covers of glam, power-pop, punk, and alternative songs, from the early 1970s through the 1990s. We still throw in a few originals here and there, but our new show is eighty percent or more paying tribute to the bands that have influenced us, everything from Bowie, to the Cure, to the Smithereens, and even the New York Dolls, Psychedelic Furs and Kings of Leon.”

“I’ve been working with Tim since 2009, and the rest of the guys just a few months” Samuels added. “so for all intents and purposes this feels like stepping out of very familiar shoes you’ve worn for the past nine or ten years, and trying something quite new. It definitely helped with the process of moving on that the Monoxide band went out on such a high note. A lot of ‘obituaries’ filled with nice accolades. When we considered names for the new band, Dioxide seemed to fit. It was our way of signalling that although our focus will be more on playing other’s songs, the style of the band will be in the same vein as the previous one.”

The band made its live debut June 16, 2011, at Second Wind Santee. After a subsequent southwest tour, drummer Jaime Ojeda left the band and former Roxy Monoxide drummer Scott Southwood rejoined his former bandmates. Their Deaf Dog EP was released in late 2011, on the Baja Vista label.

Then, in early 2013, singer/guitarist Scott Samuels told the Reader “I recently left my band Roxy Dioxide to concentrate on a solo acoustic project.” He played solo shows in Chicago and Milwaukee in March 2013, and performed a Listen Local showcase at House of Blues on April 2, as well as fronting A.M. Forever (which morphed into Vinyl Pirates, a monthly staple at the Chico Club for years).

Roxy Monoxide reunited in February 2017 at the Chico Club with a lineup featuring Scott Samuels, Michael Rennie and Darko Petrovic (who both went on to Rio Peligroso), and Scott Southwood (Hot Gin).