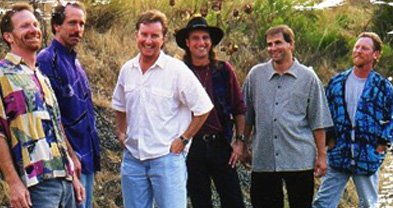 The band Roundabout, a tribute to Yes, often finds themselves sharing the bill with other look-alikes like Pink Froyd and Led Zepagain.

Roundabout's original bassist Kevin Dennis founded the band, which mainly sticks to performing recognizable radio hits rather than obscure cuts from albums like Relayer or Tales of the Topographic Ocean. Dennis was replaced on bass by Bryan Patterson.

"The first few gigs [with Bryan] were a bit shaky, but we got a lot stronger," according to the band's original keyboardist John Cox. He says the group had its hands tied when it comes to improvising on Yes' recorded output. "There's room here and there to play around with it. We tried to be faithful to the studio version, it's a jumping off point. We incorporated a lot of live intros and endings that Yes are known for...I've been complimented on my organ solo in Roundabout for being very close to Rick [Wakeman's]. That was flattering."

Steve Coon, the band's former guitarist was replaced by guitarist Johnny Bruhns. John Cox eventually left the band as well, to be replaced by Dave Smart.

Roundabout drummer Tom Schlesinger says every gig is a challenge, due to the complexity of Yes' seventies-styled progressive music. "First of all, I have to be two drummers, Bill Bruford and Alan White, both of whom play from distinct mindsets, and have quite different styles and feel. Although I've listened to Yes since I bought their first album in 1968, and Bill Bruford was a huge influence on me, my personal style is much closer to Alan White's. Bill is quite a stretch for me conceptually because he was essentially a jazz drummer. I'm a rocker and much of his playing is improvised. As a result, his tracks are more difficult to memorize and execute exactly."

Schlesinger admits to playing in a tribute band before his current gig ("I toured for a short period of time with a Bette Midler tribute show in the early '80s"). He's actually met members of the band he pays tribute to, albeit long before the formation of Roundabout. "I actually found Bill Bruford and Alan White talking to each other at the NAMM show about 20 years ago. I told them that Yes was my favorite band, how much their music meant to me, and how inspirational and influential they had both been on my playing. They could not have been less interested."

In May 2010, Roundabout singer/guitarist Johnny Bruhns was invited to join the Yes spinoff band Yoso, featuring Yes members Tony Kaye and Billy Sherwood, along with Toto singer Bobby Kimball. The guitarist first encountered Yes members at Acoustic Music San Diego in Normal Heights, where Yes moonlighters Chris Squire and Alan White performed with their band the Syn in February 2006. “Steve Nardelli, who sang lead, came without his acoustic guitar, [and] the Syn’s management had asked to borrow mine for him...that’s what started my relationship with the Yes extended family.”

Bruhns — who mainly plays Steve Howe’s parts in Roundabout — sat in for Howe when Yes was preparing for a 2008 tour. “The fact that I’m also influenced by [latter-day Yes guitarist] Trevor Rabin was much appreciated at our rehearsals,” he says.

As for meeting Howe, Bruhns says, “Wow, I wish I had a better report on the man. He was not having a happy night there in Mesa, Arizona. When I told him who I was and what I had started doing, he let out a grunt of displeasure and turned away.

“I asked him to wait and told him a story about what he meant to me. I’d headlined with a band at the Coach House in San Juan Capistrano 11 days before, not knowing that he’d played there, which apparently was the reason he perked up. I told him that when I came across a nice head shot of Chet Atkins — the walls are lined with promo shots — that the only thing I was thinking was ‘Steve Howe’s hero has played here.’ He said, ‘Oh, I see,’ and turned away again. I said, ‘Wait, you see? You’re my Chet Atkins!’ He didn’t seem to appreciate it, but I was thankful he listened just the same.

“I’ve never really been able to connect with my hero, sadly, but there’s still hope.”