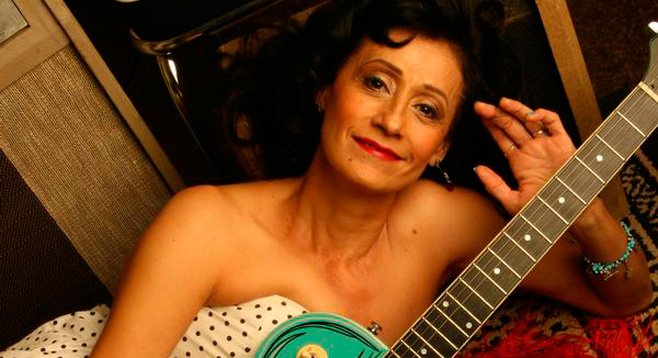 Flores was 12 in 1962. She remembers thinking how cool it was “to be living so close to the beach. My parents would take the kids out for rides, and we would go to Torrey Pines, have breakfast or lunch, then we’d go to Balboa Park. The zoo was a phenomenal zoo. We had family in L.A. and before the 5 was ever built, we would take that two-lane road, Highway 1, and ride through Laguna Beach. We felt really fortunate. I remember going to the first Jack in the Box!”

Flores was seven when her made her debut recording, singing along to "I'm Gonna Sit Right Down and Write Myself a Letter" (that performance appeared on her 1995 Rockabilly Filly album).

“I was a really shy kid. I remember some girlfriends from high school, they saw me [perform] at one of the street fairs in North Park, saying, ‘We can’t believe you’re onstage!’ I wouldn’t talk to anybody. As soon as I got a guitar in my hands, it gave me something to hide behind.”

Her first band that went anywhere was an all-girl quartet called Penelope’s Children, founded in 1968. Her dad signed for their $5,000 gear setup, purchased at Clairemont Music Center, and Flores was elated to have a guitar that looked just like Brian Jones’s. Dad said their payments to him would be $80 a month. So, they worked the Rec Hall in Clairemont, the nearby Marine base, and assorted private parties.

They had a garage to practice in, although sometimes they’d get “this really loud knock on the garage door, and when you open it up, you can see the cop’s motorcycle boots.” Penelope’s Children opened for Creedence Clearwater Revival and the Turtles at downtown's Convention Hall in December 1969, though the group spit a few years later.

Flores recalls being underage and sneaking into the Palace to see Iron Butterfly, with Darryl DeLoach singing and Danny Weis on guitar. She gigged at the Spirit with an early version of the Beat Farmers and, in 1978, performed around town in the punk band Rosie and the Screamers (which included Terry Danko, brother of the Band’s Rick Danko), playing venues like the Skeleton Club to the Bacchanal.

However, with her local options limited, she headed to Los Angeles and released a single in 1982. The following year, she put together the Screamin' Sirens, a cowpunk group. By 1985, however, she was already gigging on her own. She signed with Reprise in 1987 and has released several albums.

She moved to L.A. in 1978 to start over from “ground zero,” releasing her debut single in 1982 and going on to a record a series of increasingly successful albums. As of 2009, Flores lives in Austin, Texas.

In 2011, she played with Chuck Berry at the Rock and Roll Hall of Fame and said to herself, “Wel-l-l-l, that’s something I probably shouldn’t turn down.” She describes the rock and roll founding father as “really adorable onstage, still.” The first lead lick she ever learned to play, courtesy of her guitar-teaching brother, was that legendary “Johnny B. Goode” lead lick.

She can be heard on the 2013 tribute album Rockin' Legends Pay Tribute to Jack White, along with Gary U.S. Bonds, Bobby Vee, Joe Clay, Cyril Neville, Johnny Powers, and others. Shortly after its release, she returned to town to play the Casbah on December 22 with San Diego's El Vez, the Mexican Elvis.