Roses on Her Grave 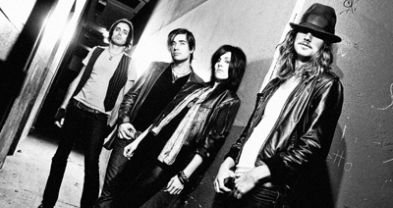 Sound description: If the Velvet Goldmine soundtrack had a part two, it would sound like this.

In Fall 2007, the band debuted at the Viper Room, the same West Hollywood showcase that rewarded Dirty Sweet with a month-long residency in 2006.

"Dirty Sweet are now in the about-to-be-the-biggest-thing-ever mode," says Viper Room talent buyer Joe Rinaldi, "but they have been in that mode for six to eight months." Other locals tapped by Rinaldi to play the Sunset Boulevard club include Lady Dottie and the Diamonds, the Nurses, Buckfast Superbee, and Transfer.

Roses on Her Grave has played Austin during SXSW, as well as performing at the Knitting Factory, the Troubador, and the Scene in L.A. Locally, they play the Casbah, the Beauty Bar, 'Canes, the Tower Bar, the Alibi, and the Zombie Lounge.

The band's debut album From Red to Gray was nominated for the San Diego Music Award's "Best Rock Album" for 2007 and was chosen as FM 94.9's local recommended band and album in May of that year.