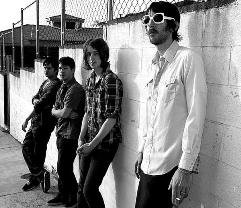 RIYL: The Secret Stolen, Silverchair, the Weather Underground, the Prayers, Fifty on Their Heels, Swim Party

The Roman Spring -- who played their first gig in June 2006 -- includes two roadies for Louis XIV, Alex Albrecht and Jake Mclaughlin. They were signed to Louis XIV's label, Pineapple Recording Group, after producing demos at home with pirated software and less than $100 worth of equipment.

While recording an album in early 2009, drummer Joesef Gastelum was hit by a car and injured while walking near El Cajon Boulevard and Texas Street. He recovered and the album remained on schedule.