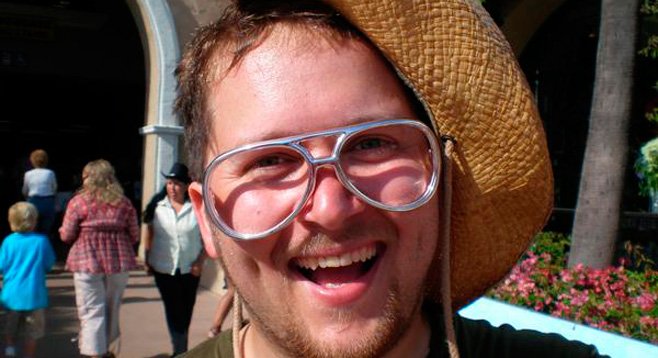 “I’m a comedic singer-songrhymer,” says Rob Deez, “which basically means that I can appeal to many different audiences. The comedic side fits in at comedy shows, the singer side works at coffee shops and bars, and the rhyming side does well at hip-hop shows.”

San Diego has a long tradition of comedic music, from Frank Zappa and his protégé Wild Man Fischer to the Rugburns (“Hitchhiker Joe”), the Beat Farmers (“Happy Boy”), the Bugs (“Dave Navarro’s Goatee Fucking Sucks”), Grammatical B (“Don’t Ask Don’t Intel”), and “the Mexican Elvis” El Vez, as well as José Sinatra, Adam Gimbel, and Mojo Nixon, whose comedic cut “Stuffin’ Martha’s Muffin” got him banned from MTV for singing about one of their VeeJay’s vajayjay.

“The cool thing about performing funny songs is that you know immediately if the audience is enjoying the tune based on their laughter,” says Deez. “They’ll be laughing so hard at one line that they’ll miss the next. I’m not worried about being pigeonholed as a novelty act...there’s a lot of improvising in my act, and that appeals to the folks that wouldn’t otherwise be interested in what I’m doing.”

For Deez, his initial success came with the appearance of his acoustic hip-hop ditty “The Bicycle Song” on San Diego’s Critical Mass MySpace page.

Deez wrote “The Bicycle Song” around the time he went on his first Critical Mass ride, a monthly bike ride that celebrates cycling and raises awareness of cyclists. After the ride, he contacted the administrator for the Critical Mass website, and the song was uploaded onto the page shortly thereafter.

“I have a dream that on one of these rides ‘The Bicycle Song’ will start playing on one of the bicycle boom boxes.”

A longtime vet of local musical theater, particularly at City College’s Saville Theatre, Deez, a native San Diegan (“I’ve lived in North Park my entire life”), admits that one of the lowest points in his hip-hop career led to the writing of the song; it was after a show in Pacific Beach, where, according to Deez, he’d had a few drinks during his set.

“Eventually, I drove home. On the way home my car broke down, and while I was parked on the side of the road, waiting for the tow truck, the CHP shows up and I get a DUI.”

With a suspended license, Deez turned to his ten-speed and his acoustic guitar and the lyrics began to flow: “I ride my bike all over the place, but I still got a beer belly and a jelly face.”

Said ya can’t dis the homie for free/ If anyone’s gonna talk shit, it’s gonna be me

“Somebody suggested that the song might not be such a good idea, because I might burn a bridge,” says Deez.

But you, Seth Combs, you were drunk that night/ the Jack Daniel’s had made ya bitter/ So ya hopped on your mobile device and ya started talking shit on Twitter

“It was the night of the [2009] San Diego Music Awards, and [Combs] said on Twitter that ‘Josh Damigo sucks balls.’ I thought, Wow, that’s kind of mean. Josh is a brother...I’ve been collaborating with [Damigo] for around three and a half years now.” Damigo won Best Local Recording at the SDMAs for his album Raw.

CityBeat’s September 15, 2009 issue included this Combs comment: “I’m now convinced that the San Diego Music Academy voters are smoking the same shit as Slightly Stoopid. How else can you explain Josh Damigo’s win…?”

Deez hadn’t met Combs before recording the track (“He definitely goes to different shows. I think he’s more like a Casbah kind of guy”), so in verse he wondered, “What’s up with that weird beard? Where did that come from?” and speculates, “I bet you wear tight pants…you probably smell like a hippie.”

Deez’s MySpace profile quotes a 2007 CityBeat article that states, “This is either the shit, or just shit.” Deez says, “I kind of like that quote. I take it as a compliment.… I might use it in my press kit.”

“Seth Combs” was performed live for the first time on October 20, when Deez and Damigo played at U-31, where Combs was guest-bartending. “It was cool ’cause it was my first time playing it live, and he was there. Seemed appropriate.”

Deez and Damigo have also played together with the acoustic rock group the Big Time Mega Show. Deez self-released Fisher-Price: My First CD in late 2011, though toymaker Mattell subsequently asked Deez to change the name. “I ended up calling it Trademark Infringement instead,” he says.

In early 2012, Deez began working on a new album, with planned tracks to include “Self Deprecating Love Song,” “Check Into Cash,” and “Hairy Palms.” “All I’m trying to do is entertain people. And everyone loves to laugh,” says Deez.

“As long as there are people who want to laugh, I’ll have an audience to play for,” says Deez, whose day job as a medical assistant at Mercy Hospital (“I deal with cannulated bile ducts and remove gallstones”) affords very few chuckles. “Making people smile is one of my favorite things to do, on and off stage. It’s a euphoric feeling for me. It’s a high. I can’t get enough of it.”

Deez has collaborated with other local lights such as Jeff Berkley and Kenny Eng. “Sure, I’ve played serious songs at concerts. But, the whole time, the audience is just listening intently, not really reacting at all until the song’s over. So, in my head, I start to panic. Do they like it? Why aren’t they doing anything? What am I doing wrong?

“Funny songs, on the other hand, come with an immediate payoff.”