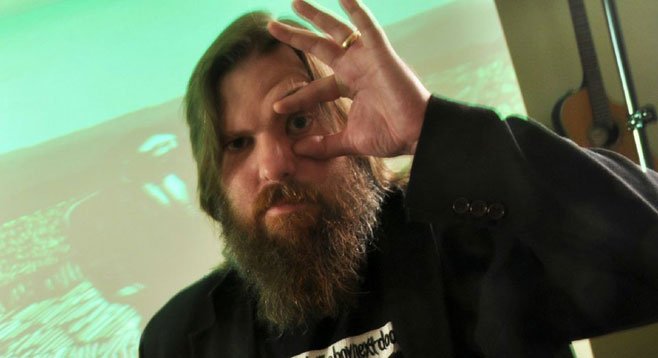 Sound description: Name a sound and Rob Crow has made it.

Rob Crow has been a singer and guitarist in countless bands, including the rock outfit Heavy Vegetable and the ambient experiment Optiganally Yours, a bizarre band centered around a 1970s electronic keyboard called an Optigan, formed in collaboration with Pea Hicks (sometimes know as Pea Hix).

Crow formed the acoustic trio Thingy with Vegetable-veteran Elea Tenuta (vocals), along with bassist Jason Soares and drummer Mario Rubalcaba. His most well-known band -- Pinback -- started as a collaboration between Crow and Three Mile Pilot's Armistead Burwell Smith IV. Drummer Cameron Jones joined Pinback in 2000. They earned national attention in 2004 with the release of Summer in Abaddon (Touch & Go Records).

Crow's solo album My Room Is a Mess was released by the label Absolutely Kosher in 2003, and his Living Well album came out in 2007 on the Temporary Residence label.

Crow has referred to the Star Wars film series in nearly all his musical projects:

“She purrs and sabers light, I thought of you, we breathe from the same mask.” -- Pinback, "Victorious D"

“Jedi will crush the Sith, no surrender to the Dark Side.” -- Rob Crow, "Jedi Master"

In addition, Thingy has an instrumental song inspired by Star Wars called “Kessel Run,” which, according to Wookieepedia, is an 18-parsec route used by smugglers to move glitterstim spice from Kessel to an area south of the Si'Klaata Cluster.

Crow's memorabilia collection reportedly includes a working R2D2 robot, comic books, a Super-8 film reel with scenes from the original movie, and an array of toys that extends to the main tool of his trade: he customized one of his guitar rigs to look like an X-wing fighter.

“On the way to the hospital, I remarked how everyone seemed to be driving like they were fleeing a zombie attack. When we got there, I couldn't help but think this was going to be like a long plane flight. It was kind of both. It was like a flight in that, halfway through labor, all the lights went out and everyone freaked, and everything took about 5 hours longer than it should.”

The room was, for at least awhile, lit only by his iPad. “After a dramatic delivery, everything's pretty much cool now. I went out into Hillcrest to try to get some food, and that's when the zombie attack part came again. No one could get food or water, and one half of the hospital had to move over to the the half with working emergency powered air.”

“I found a restaurant using gas wok cooking by fading sunlight. The docs were jealous.”

His 2011 solo full-length He Thinks He's People was nominated Best Album at the 2012 San Diego Music Awards, and 2013 found him touring the world once again with Rocket From the Crypt. Near the end of the year, he announced a new band, San Diego's Finest, which covers songs by local performers and about San Diego. They appeared at the Casbah on December 11, at a fundraiser for the local music documentary film It's Gonna Blow.

In March 2015, he announced via Twitter that he's quitting music and social media in order to concentrate on taking care of his family. It was unclear just how serious he was being, or which musical projects he was referring to. By the end of the year, however, he debuted a new band, Rob Crow's Gloomy Place.

Late 2017 found Crow collaborating with Sacramento-based math rockers Tera Melos on a videogame-themed video for the track “Warpless Run,” off their seventh album Trash Generator. The following year, Joyful Noise released a box set featuring many of his projects, with around 20 full albums, including some focusing on just one group, with bands represented including Pinback.