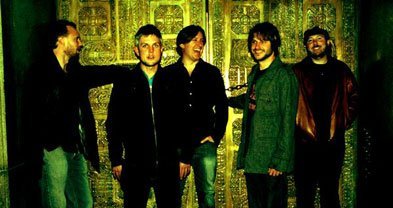 Fronted by Tom Cusimano, the Riders play good old-fashioned rock and roll. Their debut album 200 Miles From Everywhere was produced by Richie Podolor (Three Dog Night, Steppenwolf), featuring Rami Jaffee of the Wallflowers on piano, B3 organ, and accordion.

“The album is called Crown City Sessions,” according to Cusimano, “because it was recorded on a mobile unit [rented from local engineer Steve Hirsch] in a little Coronado house. The inspiration to record like this was taken from the Band’s albums from the late ‘60s and early ‘70s, like Music From Big Pink or The Band. The cover art is a picture of the house before any of the soundproofing or even yard work had been done.”

Cusimano describes one of his favorite gigs. “We were opening for America at Humphrey’s. During their show, they kept saying how great we were and saying, ‘Give it up to our new friends the Riders.’ When the guys from America asked us to join them onstage for their final encore, ‘Horse With No Name,’ our violinist Devin Shea took a short solo in the middle of the song that brought a roar from the crowd, as I sang background vocals and played tambourine. At the end of the song, they brought Devin and I to the front of the stage and had us take a bow with them.”

In late 2011, the band opened for Chris Issac at Humphrey’s.