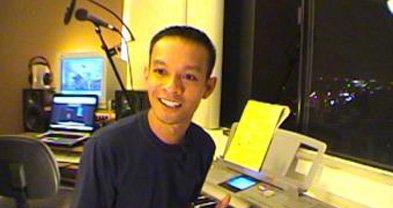 "A lot of people say I sound like Simple Plan, Barenaked Ladies, and even Weird Al," says Rex Hermogino. "Dinosaur Jr. is also mentioned a lot. I just like to write stuff that fits the mood I'm in."

In December 2006, Hermogino won $50,000 and his own Internet show in the Yahoo! Talent Show, an online video contest. Hermogino's homemade pilot beat out 5000 other submissions and landed him among 5 finalists; and an American Idol-like contest finale was filmed, currently streaming on Yahoo.com.

The 31-year-old graphic designer (born in the Philippines, raised on Guam) has lived in San Diego since 2000. In addition to his cash prize, Hermogino won a development deal to produce or star in his own Web portal program. "Rex just had a particular presence and ability to capture the audience that could easily translate into an ongoing show on Yahoo!" said contest judge and MTV personality Tom Green in a press release. "The viewing and voting public really helped us narrow the field." Since being launched in October, the Yahoo! talent show site has reportedly been visited by about four million people, with 200,000 rating votes being cast.

Hermogino's winning pilot contains several of his own music videos, including "Love on the Internet" (which won second place in the 2006 San Diego Composers Guild Song Contest), where he's seen using a vacuum cleaner as a microphone. He also shares holiday tips from his bed, takes a video tour of San Diego, and interviews New Yorkers about their favorite pickup lines.