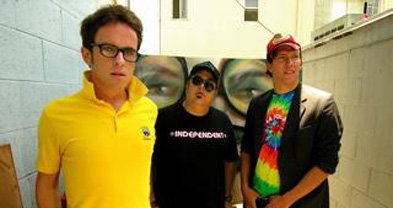 RIYL: Get Back Loretta, the Vandals, Dogwood, fluf, the Beatles, Weezer, Badfinger

The band at first included Dogwood bassist Jason Harper, though he was replaced by fluf drummer Otis Bartholameu (usually known by his first initial, O). Young continued to play with both Noise Ratchet and Reeve Oliver, though mounting commitments led to him being replaced in Reeve Oliver by Brad Davis, of the hip-hop novelty/comedy group Bad Credit.

In 2003, the band’s Reeveolution EP won “Best Rock Album” at the San Diego Music Awards; 5000 CD copies of the album were bound inside the November 2004 issue of Surfer magazine. “Not many indie marketers have been able to pull something like this off,” says Devin Johnson, Redroom Recordings marketing director. “Only the big labels have done bound-in CDs with newsstand magazines.... Our goal is to support the talent we’re aligned with on their quest to rock stardom.”

In June 2007, the band made an announcement on their MySpace page: “We made a record last spring that was slated to come out this summer on Capitol Records. This is now no longer the case.... Capitol’s parent company EMI decided to scale down both of its main labels, which are Capitol and Virgin, into one new company called the Capitol Music Group. They also drastically scaled down their band roster. The only bands that remain on what is left of the label are bands that were already a success, as major labels have little interest in trying to break new bands anymore.

“At first this was kind of a total drag for all of us in the Reeve camp, as you can imagine. But the good news in all of this is that we ended up owning this record. We will be putting out the new Reeve Oliver record ourselves. Soon.”

Reeve Oliver released The Endless Bummer EP through Apple Danish Records in 2007. A few years later, however, it appeared the band had split, with Sean O’Donnell striking off for a solo career.