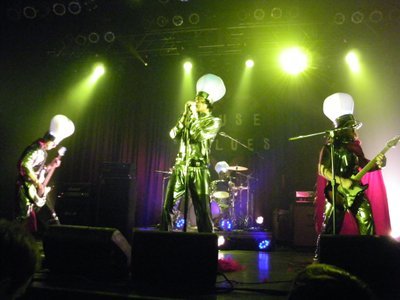 Based in Ocean Beach, the Red Not Chili Peppers are a RHCP tribute band that originally included players from bands like Deaf Zero, JUNK!, Twerp, and the Mind. “We try to play upwards of at least 20 to 30 songs each show,” says the band.

The band came together in 2009, more or less in response to an ad posted on Craigslist by bassist and Flea mimic Jonathan Savage (Deaf Zero, the New Futures, Dante’s Boneyard). “I thought, what the hell, I’ll sign on. It turns out that Izzy [drums] and I auditioned on the same day.” With Jubilee Olivas (by day an athletic director at a Chula Vista high school) in the role of frontman Anthony Kiedis, an ex-metalhead named Kenny Kim played Dave Navarro-meets–John Frusciante style guitar.

The Red Nots next played L.A. and Orange County clubs and local shows at Soundwave in Mission Beach, the Griffin, Queen Bee’s in North Park, Winstons, and the Belly Up in Solana Beach. In 2010, they were nominated for Best Tribute Band at the San Diego Music Awards, losing to 40 Oz. to Freedom, a Sublime tribute.

Savage had “fine-tuned” the band. “[Guitarist] Kenny Kim left the band before I went to Brazil. But when I got back, I had to make the much tougher decision of replacing the lead singer.” Jubilee Olivas was a well-liked, frenetic frontman who climbed up into the rafters at Winstons and helped nudge the Red Nots on to victory at a 2011 battle of tribute bands in Ocean Beach.

“I found someone new in L.A.,” says Savage. “We talked.” The singer, Remy Fischer, comes from a musical culture other than tribute, but Savage liked what he heard. “It worked out better than I expected.”

Sacramento guitarist Sean Benham played with the Red Nots from January to May 2012, indirectly causing his own termination. Says Savage, “I never would have met Marc Aliana [guitarist in a popular Barcelona based Chili Peppers tribute band called the Californicators] if Sean hadn’t missed his flight when we bought him to San Diego from Sacramento to begin touring with us last October.”

When Aliana (who also played with Jon Goodhue) moved to San Diego and joined the Red Nots, Savage thought everything had finally fallen into place. Things were golden. That is, until Aliana's visa expired and he had to return home to Barcelona.

“The band got him a three-year work visa. He’s back now. That was huge, a big hurdle.” But whatever the stress level, it was worth it, Savage says. “Now, we have an all-star lineup. It’s pretty incredible now. The audience reaction is significantly different.”

The band members specialize in John Frusciante-era Red Hot Chili Peppers, “from Mother’s Milk to Stadium Arcadium. That’s a pretty big span. But our heart and soul is Blood Sugar Sex Magik. That was the album that inspired me to pick up bass guitar.” Singer Remy Fischer was replaced in 2014 with a new singer/impersonator from Los Angeles named Justin Pierce.

Guitarist Aliana began work on a solo album in 2014. “I wanted to explore a more intimate side of my writing and singing,” he told the Reader. “I enjoy it very much, but that doesn’t mean I’m planning on staying there forever.” I ask if this could be confusing to his followers. “I’m a big fan of contrast and variety, and I like to think people will recognize me no matter what styles or moods I dive in and out of, as long as I’m making my music from an honest place.”

Then, in early 2015, "After a year of hard work, I'm finally bringing the Red Not Chili Peppers to Japan," reported bassist Jonathan Savage. "Gotta love the vision of [promoter] LOR, reminding us that tribute bands should be built from respect and honor of the original music, two things which also make the Japanese culture so incredible."