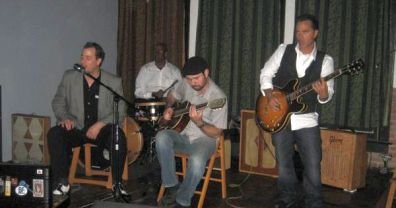 Karl Cabbage is known for playing with West of Memphis (SDMA nominated Best Blues Band in 2009), and the Smokin’ Knights, voted by Blues Lovers United of San Diego to represent their organization in the 2010 International Blues Challenge in Memphis.

Pete Fazzini (also in the Smokin’ Knights) was born and raised in Chicago, while Jimmy Zollo has played with Chill Boy, Lance Dieckmann, D.A. and the Hitmen, and surf-guitar legend Dick Dale.

Their full-length Fourteen Stories was released in 2012.