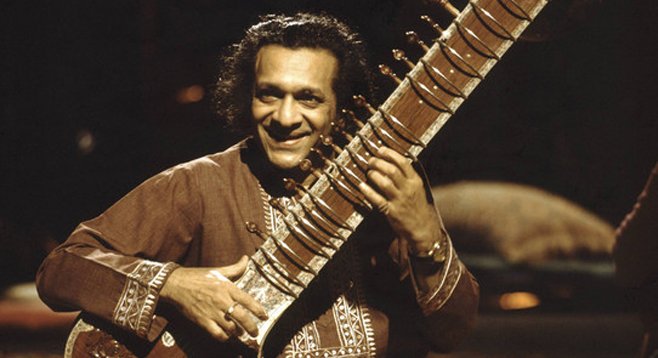 Ravi Shankar was considered the world’s master player of the sitar, a 19-stringed instrument made of gourd and teak. He performed at the Monterey Pop Festival (1967) and Woodstock (1969), plus he organized the Concert for Bangladesh in 1971 with former Beatle and sitar pupil George Harrison.

George Harrison produced and played on Shankar albums Festival and Shankar Family and Friends. In 1995, Harrison visited him in Encinitas to work on Shankar’s four-CD set In Celebration, for which Harrison wrote the liner notes.

In October 2006, he was admitted into a local hospital with lung problems. He recovered and returned home, where he still works on music as he approaches the century-old mark.

His daughter Anoushka grew up in San Diego and also plays the sitar. Pop singer Norah Jones is his illegitimate daughter.

The Very Best of Ravi Shankar compilation was released in summer 2012. In December of that year, the 92 year old's album Living Rooms Sessions Part 1 (recorded at his Encinitas home) was nominated for a Grammy Award as Best World Music Album.