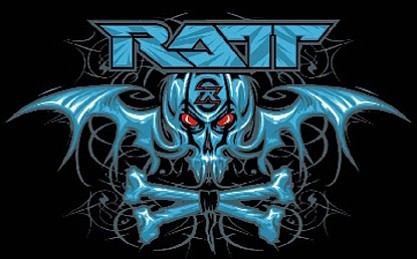 Occasional frontman Stephen Pearcy is apparently back in the band, as is bassist Juan Croucier, for a commercial from insurance company GEICO that features the band playing their 1984 hit "Round And Round" while "New homeowners rave about the character and detail of their new home, although they do have a small Ratt issue." The fluid lineup appears to now include guitarist Jordan Ziff and drummer Pete Holmes.

Ratt is most notable for their 1984 hit single, “Round and Round.” The band has sold an estimated 10 million records in the U.S., while worldwide album sales are approximated at over 18 million. VH1 slotted the band at #79 on its 100 Greatest Artists of Hard Rock.

In 1980, the band moved to Los Angeles to increase their chances of signing a recording contract with a major label. Later that year, guitarist Jake E. Lee joined the Mickey Ratt line up and the band recorded a single called “Dr. Rock/Drivin' on E,” which was given to fans at their early Los Angeles club shows.

In 1982, the band's name was shortened to Ratt. Jake E. Lee, Chris Hager, and Matt Thorr all left to form another band called Rough Cutt. (In October of that year, Lee left Rough Cutt and replaced Randy Rhoads as Ozzy Osbourne's lead guitarist.) The three members would be replaced by bassist Juan Croucier (who in 1982 left the band Dokken) and guitarists Robbin Crosby and Warren DeMartini. Warren was only 18 years old when he was called up to Los Angeles to play in Ratt. At the time he was attending college in San Diego, and at first was reluctant to drop out to join a band that had limited success, but he did.

Ratt’s self-titled debut album was released independently in 1983, soon leading to a major-label contract with Atlantic Records. In 1984, the LP Out of the Cellar hit the U.S. top ten, selling over three million copies, with its first single “Round and Round” reaching number twelve on Billboard’s singles chart. The video for that song was in heavy-rotation on MTV --- it featured the late comedian Milton Berle recreating his drag queen persona (assuming he ever de-created it).

Pearcy recalled for the Reader “Yeah, Milty, y’know, when we did that first video [in 1984], he was our manager’s uncle at the time, and it was all new back then because all of a sudden you became actors. But when Milton Berle hit that set, he pretty much took over. Don Letts, the director, he was, like, “What in the hell...?” And Milton Berle just said, “I’m playing this woman in drag,” which was his forte, back in the early days on his show, “and I’m gonna be the husband, we’re gonna be at dinner.” It was unreal. We just followed the leader, y’know?”

Ratt left San Diego in the ’80s and scrabbled to the big prize in L.A. with their triple-platinum debut LP. Pearcy told the Reader about the relocation - “My band, Mickey Ratt [their original name], with Chris Hager and John Turner and Tim Garcia, we played everywhere and anywhere and actually became a staple. I had to start all over when I moved the band to Los Angeles in 1980, through meeting Van Halen. But what I learned in San Diego is take it in stride, y’know? Enjoy. It’s a beautiful place.”

“It was a culture shock going to L.A., but I knew it had to be done. Nobody was offering us a record deal. We’d be headlining Golden Hall, Plaza Hall, Bing Crosby Hall, we were playing in front of 1500 people. In ’78 I took a trip to L.A., Whisky a Go Go, went to a Van Halen sound check, was fortunate enough to get backstage, became friends with Ed [Eddie Van Halen]. And I’d watch them play in front of, like, maybe 50 people, and they were playing like they were in the Forum. I’d go back to San Diego and say, “There’s this band, they’re incredible, we gotta be a part [of it].” It was crazy. Everybody started movin’ up there.”

Ratt released a string of albums but, by 1992, Pearcy left and the band split up, presumably putting away the pouty poses for good. Ratt reunited briefly in 1997, but the group soon became estranged with their lead singer once again.

The renewed animosity between turn-of-the-century Ratt members and their once-and-future frontman seemed to peak in January 2000, when Pearcy walked out on the band and manager Tim Heyne six days before the start of what was being billed as a “comeback tour.”

Pearcy claimed in later court documents that his ex-bandmates posted on the Internet that he had quit the band and caused the cancellation of January 2000 tour dates, and that they had publicly accused him of being an alcoholic and/or a drug addict. Pearcy contended the group ignored him when he informed them in December of 1999 that would not tour with Ratt, and that Blotzer and DeMartini misled the public by saying that he would.

In July 2001, during an interview on KNAC in L.A. which was later transcribed and posted on the station’s website, one-time Ratt guitarist Robbin Crosby admitted that he had “full-blown AIDS” and that he’d been living with the virus for the last seven years. Crosby died Thursday June 6, 2002, in his Hollywood apartment. He was 42.

In summer 2007, Ratt partially reunited its classic lineup, with Stephen Pearcy, Warren DeMartini, and Bobby Blotzer. The late Robbin Crosby was replaced by guitaristt John Corabi. Ratt bassist Juan Crocier refused to participate, so he was replaced by Robbie Crane (from Vince Neil's band). They toured with Poison and released a Very Best of Ratt CD and a DVD compilation Videos from the Cellar.

Their 2010 album Infestation reached #30 on the Billboard charts, but the band played a limited number of shows before tensions within the band forced an indefinite hiatus. After a tour, bassist Robbie Crane joined Lynch Mob, to play on their European dates, while Pearcy announced a pending solo album called Sucker Punch, set for release in Autumn 2011.

After drummer Bobby Blotzer released his 2010 book, Tales of a RATT: Things You Shouldn't Know, he began mocking Stephen Pearcy on his Facebook page. After Pearcy played the Ramona Mainstage in early 2011, Blotzer posted “Congrats to the Stephen Pearcy solo band adventure on the first show for his Huff 2011 tour, and the lucky 52 people who got to hear Ratt’s music butchered.”

In August 2011, “Round and Round” was ranked at #61 in Guitar World Magazine’s 100 Greatest Classic Rock Guitar Songs, in their volume 32 #8 issue (page 82). That same year, drummer Bobby Blotzer created a new book franchise called WANTED – Things YOU Need to Know. “I got the idea for the series in thinking, wouldn’t it be nice to approach the author of any given book that always has one or two unanswered questions? I want to gather not only the questions, but also have the person posing the question be in the book itself.”

At the end of 2011, original Mickey Ratt bassist Tim Garcia passed away. Pearcy posted a tribute writeup on his website.

At the beginning of 2012, Foo Fighter Dave Grohl was working with Ratt packers Stephen Pearcy and Warren DeMartini. According to Pearcy’s website, “Warren and I are recording an original song (Grohl song idea open to Ratt madness). Not for a Ratt record. We’ll let [Dave] tell you about it when he’s ready.”

Around the same time, bassist Robbie Crane announced his departure from the band. Then, “We started [a new studio album] a few weeks ago,” drummer Bobby Blotzer told Radio Screamer. “We’re in pre-production and it will be out in August.”

In April 2012, Juan Croucier, who quit the band in 1992, began rehearsing with Stephen Pearcy, Warren DeMartini, Bobby Blotzer, and Carlos Cavazo, for a planned performance at the M3 festival on May 11 and 12 in Columbia, Maryland.

Ratt kicked off a summer 2013 run on June 14 in Agoura Hills, CA, wrapping up August 15 in Mankato, MN with tour stops in Washington, Utah, Minnesota, Michigan as well as an appearance at the Rock USA Festival in Oshkosh, WI with Van Halen. Ratt's lineup at the time was Stephen Pearcy, Warren DeMartini, Bobby Blotzer, Juan Croucier and Carlos Cavazo.

Members of Ratt and Dokken made an emergency landing on August 17, 2013, when the cockpit of their private jet burst into flames after taking off from Moline, Illinois. Crew were able to control the fire and returned to the airport wearing oxygen masks, with no one injured in the episode.

In early 2014, singer Stephen Pearcy tells Noize In The Attic “Warren [DeMartini] and I are spearheading the next record to be what it should be: a more Out of the Cellar thing. Just real hardcore, basically...we've already recorded one track and, if this song is the only song ever released, I'd be way happy.”

Shortly after that, however, Pearcy's sister died, leading to the band's cancellation of their planned appearance on the Monsters Of Rock cruising festival. Pearcy then quit the band, again, in April 2014, announcing “After 30 years creating Ratt and losing a real brother, Robbin, it's time that I personally part ways with the band...I am officially done with having anything to do with them, due to the constant turmoil, unresolved business, personal attacks and threats in the public forum - and most of all, disrespect to the fans.”

In an early 2015 interview with Eddie Trunk, Pearcy said he'll work again with original bassist Juan Croucier, who was also a member of his outfit Dirty Rats. "I can probably speak for Juan. We're very dismayed and disturbed by quite a lot of things. What we thought was going to be a good thing ended up being even worse than we thought. When it took this long to get the four original members together, then it just falls to even bigger shit, you've got problems...we never got to where we were supposed to, even when I was in the band without Juan. But when he came back, it got worse."

In an early 2015 interview with Eddie Trunk, former singer Stephen Pearcy said he'll work again with original bassist Juan Croucier, who was also a member of his outfit Dirty Rats, but ruled out ever recording with Ratt again.

By November 2015, drummer Bobby Blotzer announced that he had acquired the Ratt name following a five-year trademark battle, with the new group featuring frontman Josh Alan, bassist Scotty Griffin, and guitarists Nicholas "Blaze" Baum and Doc Ellis set to tour in 2016. Former Ratt bassist Robbie Crane was later announced as a member, though he too left the band around the same time that guitarist Baum left in August 2016.

Within days, an entirely new Ratt lineup was announced by Blotzer, with guitarist Mitch Perry (Talas, Heaven, Lita Ford), bassist Brad Lang (Y&T), and guitarist Stacey Blades (L.A. Guns) added to their lineup. For those still keeping track with what was around the 20th membership roster, that means Ratt's lineup was then Mitch Perry on lead guitar, Stacey Blades on rhythm and lead guitar, Brad Lang on bass, Joshua Alan on vocals, and the only member who'd ever previously played with Ratt, drummer Bobby Blotzer. At least as of mid-August 2016.

By February 2017, Warren DeMartini, Juan Crocier, and Stephen Pearcy had formed yet another version of Ratt, this time without Blotzer.