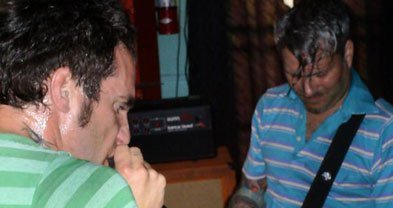 Jason Blackmore left his hometown of Kansas City, Missouri, for San Diego in 2000. “I didn’t know anybody,” he says. “I just knew there were rad bands: Pitchfork, Tanner, Boilermaker, Fishwife.”

The move came after Pearl Jam guitarist Stone Gossard pulled the plug on his Seattle-based label, Loosegroove, leaving two albums’ worth of material by Blackmore’s band, Gunfighter, out to dry.

Gunfighter formed in the ashes of Molly McGuire, which defined the mid-’90s Kansas City sound with Season to Risk and Shiner. Described by Blackmore as “big melodic noise,” Molly McGuire was a hard-working, hard-touring band with major labels knocking at their door. They signed with Epic Records to release their 1996 album Lime (produced by Failure front man Ken Andrews) and toured the ’97 Lollapalooza circuit. But pressure from Epic to stay in the studio and off the road left the band feeling alienated. They left Epic in 1998 and reconfigured as Gunfighter with Blackmore, McGuire guitarist Toby Lawrence, bassist Jimmy Armbrust, and Season to Risk drummer David Smyth.

Armbrust moved to San Diego in 2001. After three full-length albums, a few tours, and a handful of lineup changes, Gunfighter holstered their act for good in 2004. Blackmore went through a series of short-lived projects in the years that followed: an improv two-piece called Black Bunny with Ben Johnson (the Long and Short of It), the Incredible Moses Leroy (now the Softlightes), and a band with members of Nothingface called Kingdom of Snakes, which released one EP in 2004 before disbanding with a full-length that also never saw the light of day.

A few months later, Blackmore and Armbrust ran into each other on a street corner in Golden Hill, and Armbrust said, “Let’s start that hardcore band we talked about in Kansas City.” Just over a decade before, the two had played in an early–’80s-style hardcore group called Grand Punk Railroad, covering bands such as Black Flag, the Circle Jerks, and Fear. They dreamed of someday starting a hardcore punk band of their own.

“To be honest, I was totally content not playing music at the time,” Blackmore says. “But Jimmy kept pushing me, so a week or two later I was walking over to his house, writing riffs in my head as I walked, because I hadn’t worked on anything.”

John Cota (Ghetto Blaster, Hostile Comb-Over) joined on drums. The trio jammed for about a month before Blackmore sent out a mass text looking for a singer. Gabe Serbian (Locust, Skinwalker, Holy Molar) replied immediately. “I initially texted him because he’s such a guy in the music scene. I thought he’d know somebody,” says Blackmore. “I didn’t think he’d be interested.” In true ’80s punk fashion, the new group handed out demo cassette tapes to a few potential vocalists, but Gabe “just hit it out of the park.”

And so began Rats Eyes — pioneers of the ’90s Kansas City sound teamed with veterans of 2000’s San Diego weirdcore, to put a new twist on old-school SoCal punk.

Coming out from behind the drum kit didn’t come all that easy for Serbian. “During the first practice, I think I blew my throat out from screaming. And for the next couple of days I had this sharp pain in my side,” says Serbian. “But, I went on the internet and found out how to sing from my gut, and I haven’t had any problems since.”

As for the band moving so fast, Serbian adds, “It sounds so juvenile and rad, but we’re having fun and it’s punk rock — it’s what we know.”

The group decided early on to do exclusively vinyl and online releases, no CDs. A four-song seven-inch Rats Eyes I was recorded at Archival Studios in North Park (John Cota is part-owner) and released last fall by Cave Punk Records.

As of early 2011, Blackmore also had his fingers in two side-projects. First, a noisy trio with Cota called Kuntz, which Blackmore describes as “heavy, crazy, in your face, kick-in-the-balls kinda shit.” With down-tuned and overdriven guitar, unintelligible vocals, and the recent addition of Jeremy Walsh (Party Time) on bass, Kuntz plans to have a seven-inch out and tour by next summer. The second project brings Blackmore full-circle in a ’90s throwback band with Mario Quintero (Sleep Lady, Hialeah, Boyscout) of Black Box Studios in Golden Hill.

By 2015, however, the group had disbanded. Members joined with former members of the also-defunct band Death Crisis to form a new group called Death Eyes.