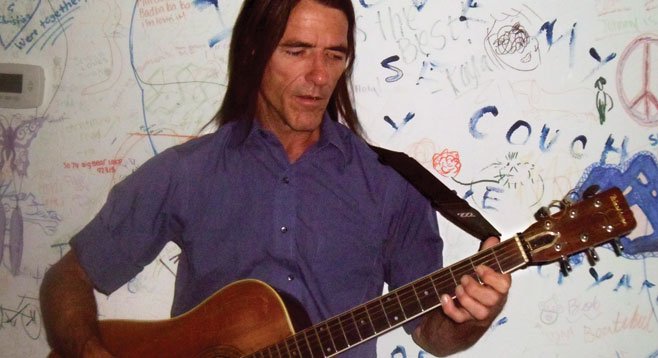 “I’m a residentially challenged entertainment engineer,” says Randy Lane, aka one-man-band Ran Diego, who has been busking the Gaslamp for several years. “I spent nine years working in a corporate environment. They can keep their ‘real’ job. I prefer my unreal job any day.”

Usually seen performing on Fourth or Fifth Avenue between E and K streets, Lane says, “I end up playing different spots every night. Currently, police do not require a permit to busk, so I compete with panhandlers, cupshakers, spangers, sign fliers, and puppy pimps.”

Asked to explain those last three, Lane says, “A spanger is a spare-changer. A sign flier is a spanger who communicates via signs like ‘will work for cash’ and ‘need a beer.’

“A puppy pimp uses a puppy to solicit donations, as in ‘my puppy is hungry.’ A few weeks ago, a lady with a puppy sat down right in front of me at Fifth and Market. She was so close, people couldn’t pass between her and my tip hat. A lot of people try to piggyback off buskers.”

Some areas are ducat dead zones. “I played the Embarcadero for three hours, during the day, with hundreds of people passing by. Zilch.”

Biggest tip? “A hundred dollars. I was just jamming away with another musician, doing some original jams. The guy [who tipped] must have really liked it. But, since the economy tanked, tips are way down...I usually wait until dark to play, after people have had a meal and a few drinks. That’s when we all loosen up a bit.”

As for his strangest busking experience, “Cirque du Soleil had a drama troupe in town publicizing an event. Suddenly, out of nowhere comes a dozen people dressed like angels. They all gathered round me and sang and danced. It was surreal. I felt like I’d died and gone to heaven. Literally.”

A San Diegan for 25 years, Lane has long specialized in bluesy boogie-woogie tunes, though his sound has taken on a somewhat Fleetwood Mac tint due to his frequent collaborations with Diane Marie, as heard on his 2010 debut full-length Emo and Logic. He’s frequently seen busking downtown, performing on various street corners, particularly around Fourth and Fifth avenues between E and K streets.

“Busking is a great way to get direct feedback from listeners in a way you can’t experience in a club or a stage setting.” For instance? “Any way people show they like the vibe is appreciated, especially when they tip. Anything spendable, edible, drinkable, or smokable is fine.”

What if a passerby doesn’t like the vibe? “Well, the one I hear most is ‘Don’t quit your day job.’ People always seem to think that’s funny. Or ‘You’re the worst musician I’ve ever heard,’ stuff like that. You really put yourself out there as a street musician, so you have to be able to take whatever comes your way. As long as some of them tip, it’s worth it. At the end of the day, if I can afford strings and coffee, it’s a successful gig.”

Under his real name, Lane also plays solo and with SideJobz. His 2012 video for “Ode to Ron Paul,” created and produced with Diane Marie, is streaming online. “I was inspired to write the song after seeing Ron Paul’s appearance on the Jay Leno show earlier this year,” says Lane. “Diane Marie at Concrete Music helped me make a video for it, superimposing quotes from [Paul’s] speeches over images of iconic American landmarks, oil wells, war footage, and military cemeteries.”

Lane admits he had a little help with the song’s lyrics, courtesy of the founding fathers. “A lot of the lines come straight from the preamble of the Constitution.” In May 2012, he and Marie released a new video and song, “Peace in the Crazy.”

Lane and artist Diane Brunner started a new project in 2019 called "theartoftheartoftheart." "We are popping up at various public venues around San Diego with Diane's amazing artwork," said Lane at the time. "We are also inviting select artists, craftsmen, and musicians to join us. These pop-up shows are free and open to the public. So far, we've popped up in Little Italy and La Jolla Cove."