Queen Divas of the Universe 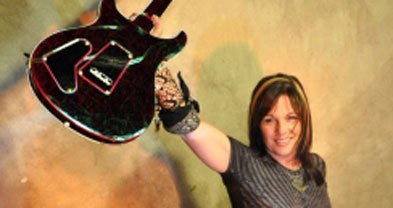 Lee arrived in San Diego in 1984 to settle down with her family at the tail-end of a career that had seen her perform in latter-day versions of Steppenwolf and Spirit, as well as record an as-yet-unreleased album under the band name Touch, backed by the original Heart rhythm section.

However, it’s Lee’s earliest group, the Kim Fowley–constructed Venus and the Razorblades, that had the biggest impact. Although the band wouldn’t have any chart success, they released one of the earliest U.S. punk singles, “Punkerama,” in 1977. Meanwhile, one of their songs, “I Want to Be Where the Boys Are,” cowritten by Lee and Fowley, became a regular part of the Runaways’ live set.

It likely helped that Lee was then roommates with Runaways Joan Jett and Sandy West. The song was included on their 1977 Live in Japan album, while more recently it was sung by actress Kristen Stewart in the 2010 Runaways biopic. In 2011, it was covered by punk band F-13 on a Runaways tribute disc.

Now a mother of three, Lee is anxious to get back into music but acknowledges that while the energy level in her music is still high, things are less boisterous today than during her time rocking on the Sunset Strip.

“All shows started with a wrestling match to get pumped up, usually instigated by Joan Jett and myself,” Lee said. “She and I would ride the shoulders of the Van Halen boys and have ‘fights.’ I remember getting rolled down the stairs of the Whisky in a barrel by David Lee Roth,” she laughed. “I believe Joan and my boot heels’ holes are still part of the famous ‘Whisky wall’ backstage.”

Lewis began as a guitarist. "I graduated from guitar to double bass. I got sick of bass and went back to guitar and my sister took up bass. We started a band called Pitch-blende. My mother loved Scrabble. She found the word in the dictionary. We bought a school bus and we cleaned it out and we were the original Partridge Family. My mother drove and my sister and I were in a band. We traveled all over Michigan. We toured with Bob Seeger, Alice Cooper, Ted Nugent, the MC5."

After high school she logged about a half million miles playing piano in a Dixieland jazz band. "And after that, I hooked up with the Spinners. Then Les Elgart, the big band leader. From there, I joined the Buckinghams. We recorded an album and toured with the Mamas and the Papas. When the tour was over the Buckinghams went back to being an all guy band. So I looked at San Diego and I married my husband and I started singing with the Mamas and the Papas. I replaced Mackenzie Phillips. That was for about a year until she had her baby and got clean and sober from all the drugs she was on."

How did Queen Divas of the Universe come to be?

Schuemaker: "Well. I had another all-female band called Hot Flash, and we went through some personnel changes. And I had called Roni. She wasn't available but she gave me Laurie's phone number, and somehow or another we all managed to meet up and we played."

Lee: "Laurie had the band name because she got in a fight with her husband one night and basically he said to her, who do you think you are? Queen Diva of the universe? And she said yeah, as a matter of fact, I am."

Says Lee, "We decided long ago that we are a cover band. Even though we have originals that's not what we're trying to do. We can play anything, though, because we've all three done everything. We've all got a big long history. We get together whenever we can."

According to Lewis, "One of the goals we have as the Divas is to take each genre that we represent and make a little play, a little story about our backgrounds. Where we came from. A 55-minute little show that would introduce us."