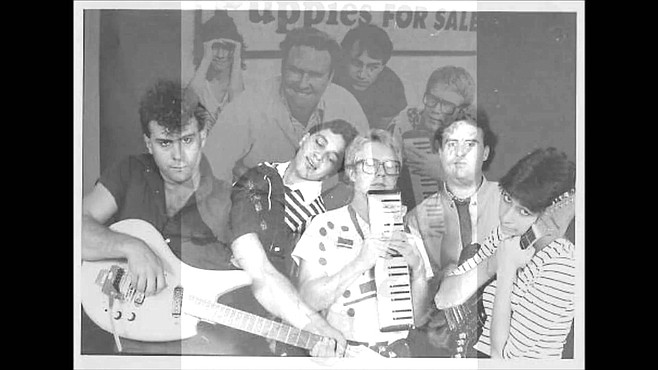 "Kim Fowley ran a full page ad [in local Kicks magazine] looking for San Diego bands. He liked our band, we had some surreal song listening meetings, and he helped land us our Stiff Records deal...We played with the devil, dumped the devil, and got Liam Sternberg to produce our single 'Mechanical Beat.' Everything is connected in these music scenes."

"Mechanical Beat," a popular gig number written by Dane Conover, had originally appeared on the Puppies six-song EP Fun Is Right, released on their own High Rise Records label at the end of 1980 (dedicated on the back cover "to the memory of John Lennon"). Recorded in San Diego at Western Audio, the EP was engineered and mixed by Michael W. Harris and mastered at I.A.M. Studios, with guest players including guitarist Robert Roosen and sax player Dan Marine.

When the band was signed to British punk label Stiff Records, they re-recorded a harder version of "Mechanical Beat" with producer Liam Sternberg, for a 1981 single b/w "Atmosphere." Their track "Slang Lingo" appeared on a 1982 Government Records compilation, Who's Listening, which also included locals like DFX2, the Penetrators, Four Eyes, and others.

In 1981, Conover (sans Puppies) got a Kim Fowley-inspired record deal with MCA and released one album as Trees in 1982 on MCA Records, Sleep Convention, produced by Earle Mankey. It was a critical success but a commercial failure, a fact that has been blamed on mismanagement by the label. Conover ended Trees shortly after and began making music with his wife, moving to Northern California. Conover also wrote a popular Beat Farmers song called “Happy Boy,” popularized by the late Country Dick Montana.

James Krieger and Nino Del Pesco joined with Country Dick Montana for a band called the Snuggle Bunnies. Del Pesco went on to the Knights of the Living Dead, AntiProduct, and the Black Tongued Bells, as well as playing bass on Russ Tolman's 1994 album Sweet Spot. As of 2016, Del Pesco was still composing songs as well as writing scripts and plays.

Singer/drummer Irene Liberatore later appeared on albums like Bo-Day-Shus!!! by Mojo Nixon and Skid Roper and on Cindy Lee Berryhill's debut Who's Gonna Save The World?

In September 2016, Jimmy Fallon spotlighted the Puppies on the Tonight Show, in a Do Not Play segment that featured both an album cover and a portion of the song "Cat Food," which the house band played with Questlove on vocals.

Summer 2017 found Richard Filaccio recording a new version of his 1986 solo track "The Night of the Hunter," which he described as "A tale of a nightmarish escape scene from a vampire, running and hiding, but also realizing it is too late. Things have happened. Horrible things...it has a very late '80s vibe intact, influenced by bands like Bauhaus and Sisters of Mercy." He followed that in 2018 with a new lo-fi rock single, "My Deconstruction."

Bassist Nino Del Pesco, who also played with Country Dick Montana's Snuggle Bunnies and Knights of the Living Dead, passed away in summer 2019.