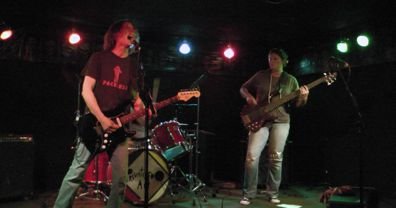 Based in North County San Diego, Privatized Air’s first tour was a five-state venture in the fall of 2009 that took them from Vegas to Denver. A self-titled CD co-produced by Jeff Brooks was released in March, 2010.

Their sophomore album Tomorrow or Something was released in February 2011. According to Jonny Q, “The album includes a song inspired by William S. Burroughs, and another track that compares the passion of love to that of drug addiction and murder.”

The band aspires to constantly tour. “Rehab is for quitters, and we will never quit playing music. We’d rather keep the details of the rehab thing private, so Courtney Love doesn’t try to take our babies away.”

The release of their 2011 album found them back on the road. “I booked us on two tours, going through June, to support the CD, which is almost laughable, since the CD is more to support the tour than the other way around. Like most bands, what we sell is what we live on...We sleep free in the van the whole time, and we mooch off anyone who will have it. Some gigs offer small guarantees, some [paychecks] depend on the door, but mostly it depends on merch sales.”

One new luxury is the band’s own driver, Mike Darrach. “He’s basically unpaid, other than an occasional five-hour power drink or Newcastle Ale. His only pay so far has been a crew edition of the Privatized Air T-shirt, but he’s a great friend, he doubles as a photographer, and he’s an all-around sober guy, which is exactly what we need right now.”

However, the road can be a cruel mistress. “I think our worst show by far was in St. George, Utah. We were booked at a large coffee shop that insisted our drummer play their electronic drum set. He is very loud, but he had no experience with those, and its sound didn’t come through the monitors. So we had to play to the clicking of his sticks hitting the pads because we couldn’t hear the drum sounds that were coming out front.

“By the end of the night, we were all ready to kill ourselves.”

A new CD was released in early 2013, “The album is titled Karoshi, which is a Japanese word that literally means working yourself to death,” explains Jonny Q. “Not because we work, but because we wanted people to think about the results of all of this consumerism and the consequences we’re so rarely warned about. Karoshi is fairly common in Japan.”