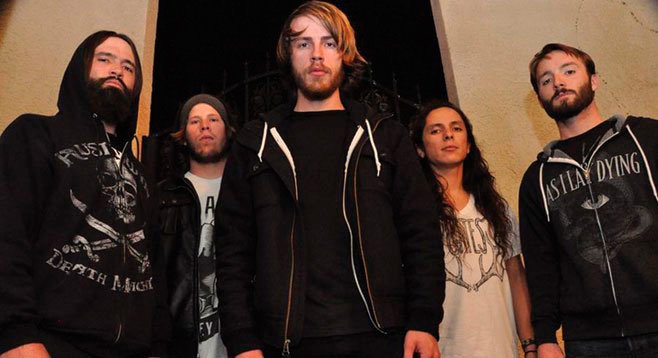 Prevailer is made up of members from a defunct hard-rock/metalcore bands Carol Ann and Zombie Cartel. After the late 2011 breakup of Zombie Cartel, drummer Jerad Buckwalter suggested that guitarist Jono LaNasa and ex–Carol Ann guitarist Diego Martinez meet and jam.

With Jerad Buckwalter’s brother Will on bass and frontman Evan Burdick, they began cranking out metalcore originals. “Our new songs have shredding riffs, machine-gun double bass, neck-snapping breakdowns, and tons of energy. But they are also a lot more elaborate and melodic, with plenty of guitar harmonies and structure.”

The band’s name Prevailer, explains LaNasa, doubles as a mission statement. “Our goal is to spread positive messages from hard personal experiences through our aggressive music, which is a scene normally known for spreading negative or violent messages.”

Positive messages or not, LaNasa has a lot riding on Prevailer: “This is by far the most excited I’ve been about a band. I’m not getting any younger. This is probably my last diehard shot before I have to grow up.”

Their debut full-length was released in 2012 by New Justice Records in Australia. The Aussie connection began six months previous in North County. Prevailer drummer Jerad Buckwalter was asked to loan some extra drum gear to the band As Silence Breaks, which was here from Sydney, to record at Lambesis Studios. Located in San Marcos, Lambesis has a reputation as the go-to shop for metalcore following the 2006 recording of As I Lay Dying’s An Ocean Between Us. It is co-owned by Dying member Tim Lambesis and a recording engineer named Daniel Castleman.

“As Silence Breaks hand-picked Castleman to produce their upcoming record,” says LaNasa. “It was their first time in the U.S.” The guitarist says the two bands bonded over similar interests and that Buckwalter helped out on As Silence Break’s tour. A twist of fate came when New Justice Records was taken over by As Silence Breaks front man Sam Rilatt.

“Soon after, Sam offered us a deal.” Their live debut was June 23 at the Flying Elephant in Carlsbad.