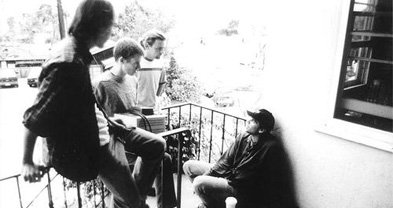 Current Status: The band ended with Denver Lucas's death in 1994.

“When I met Denver,” recalls Voiles, “I was still in junior high. I went to my bus stop in Normal Heights, on the corner of 35th and Adams Avenue, and there’s this little kid there; I’d been going to school with this kid since I was a little kid too. He had a trench coat on. He was really skinny and short. Like me. And we weren’t particularly good friends. We didn’t become good friends at first and then eventually figured out that we lived, obviously, in the same neighborhood. And somehow I fell in with him, and Matthew Connelly, and Keith Whitcomb, and Dan Reinharts. We all had bad punker haircuts. There were a couple of girls who hung out, Sarah J. and Suzie N. And we, uh, we listened to punk rock music, the Germs, things like that."

The band's only official releases were a split single with Heavy Vegetable and the song "Split Fingered Fastball" on the Ask for Disorder compilation of local bands, though a full-length and a later rarities compilation were compiled.

Denver Lucas drowned in 1994 at age 22 under mysterious circumstances, just before the band was to record new material. Drummer Lee Chapman had recently quit, leaving the band's future in question.

"We were sitting at a table by a window in Juanita’s, a popular Mexican eatery on Coast Highway in Leucadia," recalls music writer Paul Williams, founder of Crawdaddy magazine. "Lucas walked by, spotted us, and made funny, joyful faces at us through the window. Later I learned that he’d been on an LSD trip with friends and that that was the night he disappeared.

At the time, TV producer Jason Bang had a music show called Leche: The Musical, which aired on Oceanside's KOCT from early 1993 through early 1995. He recalls, "We taped footage of one of Powerdresser's last shows with Denver Lucas in 1994, and I shot the final video interview with him before he disappeared." Lucas was last seen alive by roommates on November 2, 1994, allegedly high on LSD and heading for the cliffs of Encinitas. His badly decomposed body was discovered over a week later off Carlsbad State Beach and originally listed as a "John Doe" until fingerprints were matched to musical instruments in his home.

Bang continues, "During the interview, he admitted to doing drugs -- mushrooms, acid, and any other hallucinogenic drugs that he felt like doing. He also put across a message of love. He said, 'If you're with someone that you love, tell them now while you have the chance.' Before he passed away, he agreed to do a bit in the TV show called Dear Denver where he'd answer letters about love and life to anyone that wrote in."

When he died, Lucas was talking about distributing Powerdresser's next record for free. His motto for this project: “Promoting Communication, Interaction and Exercise.”

Drummer Lee Chapman passed away in 2012.