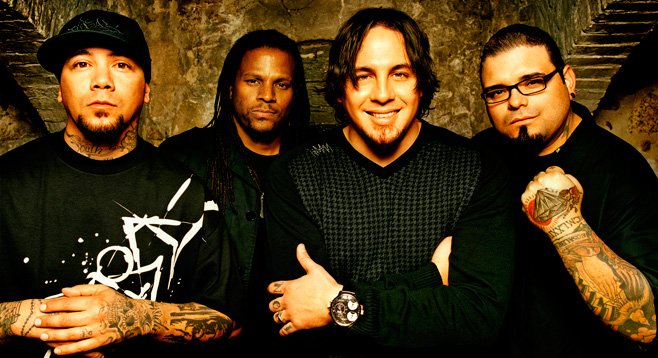 In the early 1990s, Marcos Curiel and Wuv Bernardo engaged in jam sessions in a band called Eschatos, without a vocalist. After his mother's fatal illness, Sonny Sandoval converted to Christianity; he joined P.O.D. in late 1991 or early 1992.

Traa Daniels joined the band in 1994 when they needed a bassist for a concert, to replace Gabe Portillo, who appeared in the original 1992/93 demo tape. P.O.D. signed with a relatively unknown Christian label, Rescue Records, and released two albums under the label between 1994 and 1997, Snuff the Punk and Brown.

In 1997, they released an album of live recordings from the Tomfest festival. In 1998, they signed with Atlantic Records, which brought the mass-media coverage that self-production could not.

Prior to the release of their first major album, The Fundamental Elements of Southtown, P.O.D. released The Warriors EP, a tribute to their loyal fans. This limited-edition CD has only 30,000 copies in print and was licensed by Atlantic Records and distributed by Tooth & Nail Records.

P.O.D.'s 1999 mainstream debut album, The Fundamental Elements of Southtown, spawned the hits "Southtown" and Total Request Live favorite "Rock the Party (Off the Hook)". In 2001, on the same day as the 9/11 attacks, P.O.D. released their fourth studio album, Satellite. The album's first single, "Alive," already a rock radio hit, went on to become one of MTV and MTV2's number-one-played video of the year.

The album's second single, "Youth of the Nation," was influenced in part by the school shootings at Santana, Columbine, and Granite Hills high schools. The album went on to become RIAA-certified triple platinum.

In 2003, guitarist Marcos Curiel left the band due to his side project, the Accident Experiment and "spiritual differences." However, Marcos claims that he was actually kicked out of the band. Curiel was replaced by Jason Truby, former member of Christian thrash/death metal band Living Sacrifice. In the same year, they released their third mainstream album, Payable on Death, which went on to sell over one million copies worldwide.

In 2003, the band's song "Sleeping Awake" was featured in the movie The Matrix Reloaded. A music video was also made for this song, which was their first major hit with new guitarist Jason Truby.

On November 15, 2005, P.O.D. released The Warriors EP, Volume 2. It features some demos from their sixth album Testify, as well as two live tracks, two B-sides, and a cover version of the 1980s Payola$ reggae hit, "Eyes of a Stranger." It was produced by Travis Wyrick.

The Testify album was released January 24, 2006. In August of that year, P.O.D. announced in their online newsletter that they had left Atlantic Records. The band next teamed up with Rhino Records to release a greatest hits record simply titled Greatest Hits: The Atlantic Years, which was released on November 21, 2006; the band recently shot a music video for "Going in Blind," one of the two new songs they included on the album.

In a statement made by the band's manager on their MySpace page, it was officially announced on December 30, 2006, that Jason Truby had left the band. The member he replaced, Marcos Curiel, was asked to rejoin, having settled a two-year-old lawsuit over unpaid royalties earlier in 2006. On February 2, 2007 the band announced a new record deal with Columbia Records,

On the May 13, 2007 episode of his Mind of Mencia TV show, comedian Carlos Mencia aired P.O.D.'s first new music video to feature returning guitarist Marcos Curiel. The song is not from their upcoming new album; it's a superhero spoof done with Mencia called "Beaner Man." A video was also made and uploaded to YouTube.

The band played a rare club show at the Whisky in Hollywood on August 27, 2010, where they got their first major label record deal.

On March 25, 2011, P.O.D. filed a lawsuit against their record label, Tennessee-based INO Records, in U.S. District Court in Nashville. In the filing, P.O.D. claims that the company breached its contract by preventing the group from recording their next album.

According to a statement issued by P.O.D.’s Nashville-based attorney John R. Jacobson, the agreement with INO included two option periods in which the label was required to advance $400,000 for each contracted album. INO released the first album When Angels & Serpents Dance in 2008. In November of 2010, P.O.D. advised INO it was prepared to begin recording the second album, but INO has so far refused to pay the advance.

INO Records specializes in contemporary Christian music. Distributed by Sony Records, Epic Records, and Columbia Records, INO has been owned by Integrity Media since 2002. According to L.A.-based publicists the Brookes Company, P.O.D. tried to negotiate with INO Records in what was called an amicable effort to have the record company honor its contractual commitments. When both sides reached an impasse, P.O.D. proceeded with litigation.

Very soon, an announcement was posted by the band: “P.O.D. is being forced to postpone their May and June European touring plans due a contractual breach by the organizing tour promoter,” according to a band statement. “[We] will be working with different promoters to return to Europe in the Fall with specific announcements coming soon.” A new band album is being recorded at Golden Track Recording Studio.

They played a surprise Belly Up gig on May 18, 2011, after the scheduled band Southtown General (side project of P.O.D. drummer Noah "Wuv" Bernardo) was unable to round up all its members. Bernardo instead gathered his OTHER band to play.

Around the same time, they began recording with long-time producer Howard Benson who also produced their Satellite album and hit albums from 3 Doors Down, Kelly Clarkson, Theory Of A Deadman, Daughtry, All American Rejects, and My Chemical Romance.

Later in 2011, they inked a multi-album, worldwide deal with Razor & Tie and embarked on their Rock Allegiance Tour through Autumn, with Papa Roach, Puddle of Mudd, Buckcherry, RED, Crossfade, and former San Diego band Adelita’s Way. In early 2012, they played the Rocklahoma music fest May 25 through 27 in Pryor, Oklahoma, also with Adelita’s Way.

A DIY video for “On Fire,” from their 2012 full-length Murdered Love, their first studio full-length in four years, includes Jacoby Shaddix of Papa Roach. It was filmed by drummer Wuv Bernardo during the band’s Rock Allegiance Tour. A preview track called “Eyez” (featuring guest singer Jamey Jasta) began streaming online shortly before the album’s July 2012 release, as did a new video for the full-length’s title track.

Their San Diego hometown is featured in a video for the second single off Murdered Love, “Higher,” directed by Ramon Boutisveth (All That Remains, For Today, Trivium). The band also partnered with Harley Davidson for the video, which features a number of Harley motorcycles. “We went through a bunch of treatments, and we loved the fact that the director wanted to do the video in San Diego,” says Sonny Sandoval. “The treatment had a good vibe, and it reminded us of how we felt when we saw the video for ‘Alive.’”

In September 2012, they played the two-day Rock Vegas music festival at Mandalay Bay Resort in Las Vegas, along with former locals Adelitas Way, as well as Rob Zombie, Shinedown, Marilyn Manson, Godsmack, Staind, and others. That was followed by a U.S. tour with Daughtry and 3 Doors Down that ran through mid-December, while a limited edition vinyl pressing of Murdered Love dropped November 20, available in two colors: transparent red and clear with red splatter.

An early 2013 tour with Shinedown and Three Days Grace wrapped up February 20 in Lowell, MA, followed by a European tour that kicked off June 12 in Moscow and concluded June 25 in Koln, Germany, including appearances at the Download Festival and Hellfest and a few coheadlining dates with Hellyeah.

The fourth video from Murdered Love, “Beautiful,” was directed by Rich Ragsdale (The Sword, Lenny Kravitz) and co-directed by Brooks Jones (Norma Jean). A North American tour with Flyleaf hit San Diego on August 10, 2013, at the House of Blues.

In early 2014, they announced plans to release a crowd-funded acoustic album featuring reworked versions of their hits, as well as new songs, to be made available on a direct-to-fan platform via PledgeMusic. The following year, they embarked on a ten-date overseas tour with Hoobastank and Alien Ant Farm, beginning in London on May 7.

A new single released in summer 2015, "This Goes Out to You," preceded their tenth album The Awakening (released August 21), which reunited them with producer Howard Benson (who helmed their 1999 album The Fundamental Elements of Southtown). Singles streamed online included "Criminal Conversations" featuring In This Moment's Maria Brink.

A video for "This Goes Out To You" was directed by San Diego-based filmmaker, Gavin Filipiak (Prayers, Young Gods) and was shot on location as a tribute to their hometown community and San Diego culture.
The clip features local duo Prayers, the San Diego Derby Dolls, dancers Hob.e, Prime Tyme Ron Myles and Jason Sensation, and vintage cars from various local clubs organized by Tribal Streetwear.

The band spent most of April 2018 touring Australia. The following year, drummer Noah "Wuv" Bernardo Jr. teamed up with members of Flyleaf for a new band called Belle & the Dragon.