The Plot to Blow Up the Eiffel Tower 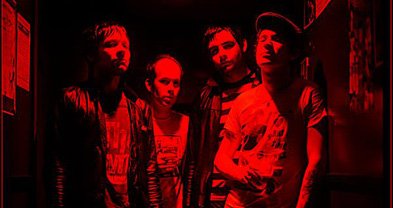 Sound description: Experimental, confrontational, garage punk with noisy guitars, jazzy saxophones, and a vocalist who screams as much as sings.

"We're a gang of Jews and homosexuals [who] draw our main inspiration from the rioting queers at Stonewall, babies throwing temper tantrums, the Hell's Angels at Altamont, and really ugly, greasy sex noises," according to Brandon Welchez, singer/saxophonist for the Plot. "We're proud of that piss waterfall that got us banned in Baltimore. So we took the [band] name from a book by rock critic Greil Marcus called Lipstick Traces, because we figured he might write about us if we plagiarized him."

During a 2005 European tour, complaints about the Plot were reported by European booking agents 2 for the Road. They hired the band to play several German dates in April. The group's new album at the time, Love in the Fascist Brothel, included song titles such as "Reich Stag Rock," "Lipstick SS," and "Rattus Über Alles."

Addressing the concerned, 2 for the Road posted a notice on its website: "The Plot to Blow Up the Eiffel Tower are not Nazis [and they] are not German, which means that they can naturally address our Nazi background differently than we do.... We talked to them about their stage outfits and, over here, they will not appear in the same radical [Nazi-inspired] outfits they wear onstage in the U.S., to show respect. They know that they are guests here and will behave accordingly. But they have decided to address the Nazi issue on their new record and therefore a certain degree of confrontation cannot be avoided...the Plot make fun of Nazis."

In response, the Plot posted on their website "The idea scattered across Love in the Fascist Brothel is that fascism, far from being defeated in 1945, simply went underground, where it now functions as the political unconscious of the West...a real neo-Nazi would be disgusted by our sexual stage antics, Jewish and gay band members, our music, our absurdist art."

"This didn't sit well with the conservatism of half the crowd, who immediately started heckling us.... One of them came up to the stage and was yelling things, so I spat in his face. After our last song, a group of 15 to 20 armed Mormon jocks gathered.... One of them had keys in his fist and punched our drummer's snare drum. One of them punched our drummer in the head, and I swung a cymbal stand at him.... I remember one of them looked me straight in the face and said, 'We've killed people before, and we'll do it again.'" Bar employees defused the brawl.

As for why the group was "banned in Baltimore," Welchez says, "Our roadie at the time was completely knackered. He was trying to make his way to the bathroom, which was upstairs, and he decided he didn't want to finish the walk.... We were ejected and told never to return and that we wouldn't work in Baltimore again. We found the tires to our van slashed once we got outside."

The Plot split in December 2006, playing their last show at the Che Cafe. Welchez said at the time "Me, Willy [Graves, bassist], and Brian [Hill, drummer] have the Prayers, and we have a four-song EP coming out early next year.... Me and Chuck [Rowell, guitarist] are doing the Vultures, and we're writing an album." The Plot's final release was the seven-song EP Saviours and Suckers.