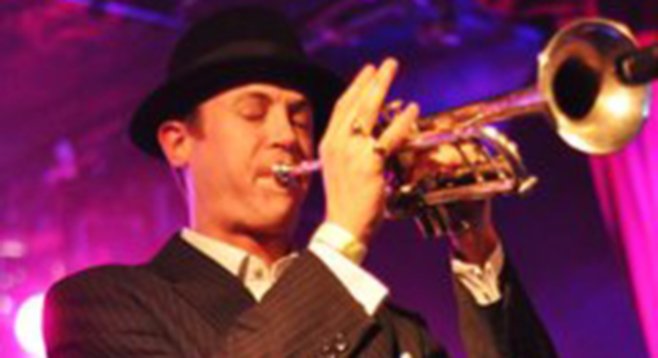 “Players Inc. started in Boston, when all the touring musicians would get home from their main gigs,” says Slightly Stoopid trumpeter/keyboardist Christofer “C-Money” Welter of his side band. “It was a chance for the musicians who often back singer-songwriters to open up musically and keep our chops sharp while off the road. The music is open, but with the form of dub, hip-hop, and R&B in a sexy, mature, deep-thinking kind of way.”

C-Money’s other band, O.B. ska-punks Slightly Stoopid, played their first paid gig at Soma in 1994 and were signed to Sublime singer Bradley Nowell’s Skunk Records label the following year, while founders Miles Doughty and Kyle McDonald were still attending Point Loma High School. C-Money was added to the roster in 2006, having met the band near the end of his eight-year run with Boston-based John Brown’s Body and relocating to Ocean Beach, which he still calls home.

“Being in Stoopid took me to a whole other level. We’ve played Australia, Japan, Guam, Amsterdam, Portugal, Denmark, the U.K., Germany, Holland...we even sold out Red Rocks [in Colorado].” Their Top of the World album, released in August 2012, took them to number 13 on the Billboard Top 200 chart, as well as earning them an appearance on Jimmy Kimmel Live.

Slightly Stoopid teamed up with Cypress Hill to stage “420 Hot Box” on April 20, 2013 at Red Rocks Amphitheatre, celebrating Colorado’s legalization of marijuana. It’s a topic C-Money feels strongly about. “We need to amend the Constitution of the United States to legalize marijuana, so we can focus on real problems and generate much-needed money for our economy.”

In fact, there’s only one topic that he’ll forbid people to discuss at his funeral. “That ganja smoking is bad!”

“I left Slightly Stoopid for good [in December 2013],” C-Money told the Reader. “After nine awesome, magical, fun, epic years, it was time to move on. Stoopid opened me up to so many new musical horizons I never thought possible. They really shaped me into the songwriter I’ve become. It wasn’t easy to leave a steady gig and go my own way, especially with a child just being born.”