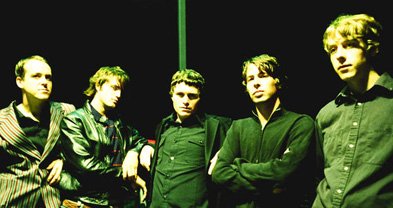 Sound description: According to the band, "Our sound meanders between post punk, new wave, and garage without adhering too predictably to any genre."

The creative core of Plastic Explosive was formed when high school chums Brandon Burlington (guitar) and Kevin Lau (bass) began meeting together to massacre their favorite songs with crappy instruments. After a while they realized that it was much more impressive to girls if they labeled this noisy mess "original" music.

Ray Argyle (vocals/keyboards/acoustic guitar) played bass and sang for the band Congress of the Cow, which gained some local acclaim in 2002 when they were voted Best New Artist at the San Diego Music Awards. Argyle then went on to try his hand as a solo artist for a couple of years before realizing that being a singer/songwriter is for douche bags.

Trevor Holland (rhythm guitar/backing vocals) tried out for American Idol and, when that didn't work out,l he settled for playing guitar in a band. He's still a little bitter.

These unlikely collaborators have been playing music together for the past two years. They followed a successful tour with a show at South by Southwest in Austin, Texas (March 2005). Their debut self-titled release was nominated for "Best Alternative Album" at the San Diego Music Awards (September 2005). They've shared the stage with bands like the Kills, She Wants Revenge, and they also had a spot on the mainstage of the 2005 San Diego Indie Music Fest alongside Veruca Salt. Their second album, Scan the Wasteland was released in 2007.

Bassist bassist Kevin Lau (who also played for UV Tigers) died in late March, 2012, while on vacation in New York.